About ‘The Macroeconomics of De-Cashing’ 1/2

The International Monetary Fund has published a working paperSee Banknote paper. entitled The Macroeconomics of De-Cashing by Alexei Kireyev, which presents a framework for the economic implications of de-cashing, defined as replacing paper currencyThis is often used as a generic expression to refer to banknotes, versus the “metal currency” expression, which refers to coins. with convertible deposits. The paper draws a balance on possible positive and negative macroeconomic implications of de-cashing, and proposes policies capable of augmenting its economic and social benefits, while reducing potential costs.

The IMF writes that working papers are published to elicit comments and encourage debate. Here are my thoughts.

The second section of the paper reviews cashMoney in physical form such as banknotes and coins. usage and recognizes its leading role as a payment instrumentDevice, tool, procedure or system used to make a transaction or settle a debt. and a store of valueOne of the functions of money or more generally of any asset that can be saved and exchanged at a later time without loss of its purchasing power. See also Precautionary Holdings.. It also underlines that “Cash has been created as the historically most convenient form of moneyFrom the Latin word moneta, nickname that was given by Romans to the goddess Juno because there was a minting workshop next to her temple. Money is any item that is generally accepted as payment for goods and services and repayment of debts, such as taxes, in a particular region, country or socio-economic context. Its onset dates back to the origins of humanity and its physical representation has taken on very varied forms until the appearance of metal coins. The banknote, a typical representati..., and carrying cash in the wallet is often perceived as a fundamental human right.”

The third section analyses the economics of cash and money. Here, the author compares cash and transferrable deposits, i.e. money held on deposit accounts at a commercial bank. The author writes “currencyThe money used in a particular country at a particular time, like dollar, yen, euro, etc., consisting of banknotes and coins, that does not require endorsement as a medium of exchange. and transferable deposits are very similar and both meet the definition of broad money” even though he recognizes some differences: “First, currency can become technically obsolete. Banknotes fade and break, and the efforts to remedy the problem with plastics is of little help and involve unneeded costs. Transferrable deposits do not have this problem. Second, payments with currency are anonymous, which makes them a popular vehicle for abuse, tax avoidance, terrorism financing, and money launderingThe operation of attempting to disguise a set of fraudulently or criminally obtained funds as legal, in operations undeclared to tax authorities, and therefore not subjected to taxation. Money laundering activities are strongly pursued by authorities and in most countries, there are strict rules for credit institutions to cooperate in the fight against money laundering operations, to declare and report any transactions that could be considered suspicious.. Transferable deposits are personified and generally cannot be used for these purposes. Third, currency is prone to counterfeiting, at times on a large scale.”

Currency and transferable deposits are very different animals. The easiest way to demonstrate this is that according to the World Bank, over 2 billion adults do not hold a bank account. On the other hand, there are approximately 600 billion banknotes in circulation worldwide and cash is perhaps the only product in the world which has achieved a market penetration rate close to 100%. The most commonly cited barrier to opening a bank account is lack of funds. Other reasons include living in an underserved rural area, the inability to prove one’s identity, or a lack of financial literacy. Worldwide, over 200 million micro, small and medium-sized businesses also lack access to basic bank accounts and adequate financing.

Currency is not technically obsolete. On the contrary. Banknotes and coins incorporate state-of-the-art technology not only to stay ahead of counterfeiters but also to improve their durability.  The number or euroThe name of the European single currency adopted by the European Council at the meeting held in Madrid on 15-16 December 1995. See ECU. counterfeits declined by 24% in 2016. 684,000 notes were withdrawn from circulation in 2016, for a total of over 19 billion notes in circulation. This represents a value of € 44 million. Meanwhile, card fraud totalled $21.84 billion globally in 2015, a 20.6% increase over 2014. Oddly, 2016 figures for card fraud are not available.

Is cash a popular vehicle for abuse, tax avoidance, terrorism financing, and money laundering ? This argument is frequently used by those who support the elimination or the reduction of cash usage but there is little evidence to substantiate this.  According to the report Cash, freedom and crime – Use and impact of cash in a world going digital published by Deutsche Bank Research,  the share of cash in payments does not reflect the size of the shadow economy. Germany and Austria are cash-intensive economies with small shadow economies, while Sweden is a low-cash country with a relatively high shadow economy. 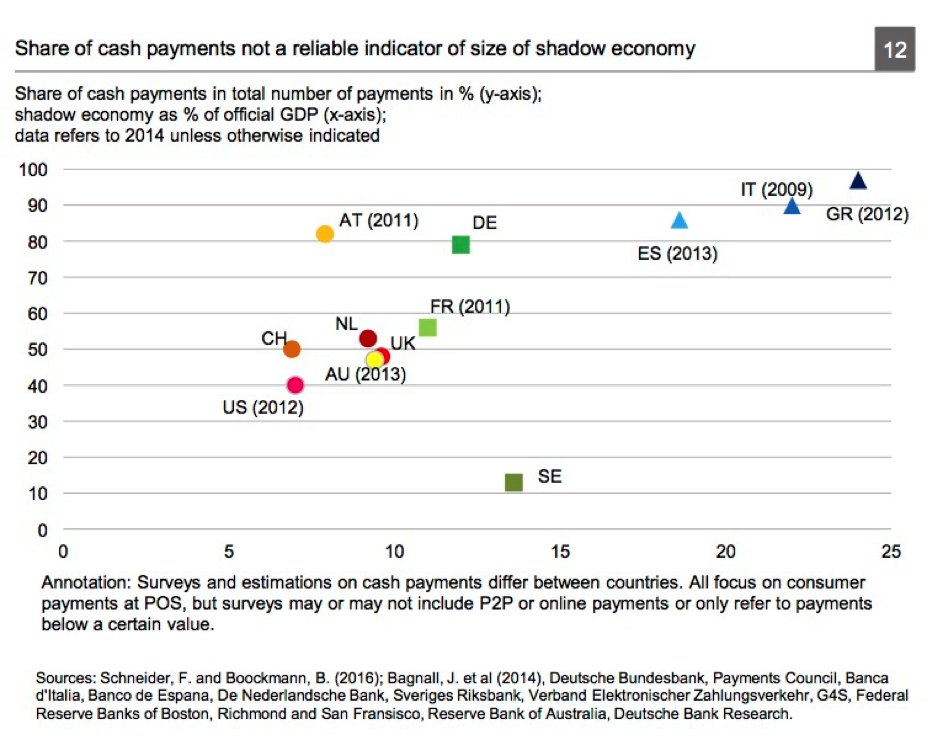 Meanwhile, the Guardian reports that British authorities are investigating a vast international money-laundering scheme dubbed the ‘Laundromat’  which involves the transfer of billions of dollars from Russia into Europe, the US and other countries. So far, $20 billion have been tracked down but the real total may be as high as $80 billion. Many of the world’s largest banks have been involved in the transactions.  In another case, Crédit Suisse were surprised by a tax evasion and money laundering investigation spanning five countries and potentially involving thousands of account holders.