Croatia Set to Adopt the Euro in January 2023

On June 1, the European Commission published the ‘2022 Convergence Report’, which assesses the progress of EU member states which are not part of the euroThe name of the European single currency adopted by the European Council at the meeting held in Madrid on 15-16 December 1995. See ECU. area towards joining. Bulgaria, Czechia, Croatia, Hungary, Poland, Romania and Sweden are the seven non-euro area member states legally committed to adopting the euro. The report has concluded that Croatia is ready to embrace the euro on January 1 2023, bringing the number of euro area Member States to twenty. Denmark benefits from an opt-out clause from the Economic and Monetary Union.

Simultaneously, the European Central Bank published its biennial Convergence Report, concluding that Croatia is within the reference values of the convergence criteria – price stability, sound public finances, exchange-rate stability, and long-term interest rates. The report also concludes that Croatian law is compatible with the Treaties and the European System of Central Banks Statutes.

The 20th Member of the Euro Area

The positive assessment by both institutions paves the way for approval during the European Council in June and admission into the euro area on January 1 2023. Croatia would become the 20th Member of the currencyThe money used in a particular country at a particular time, like dollar, yen, euro, etc., consisting of banknotes and coins, that does not require endorsement as a medium of exchange. union and the first new Member to join since Lithuania in 2015.

Euro banknotes and coins were first introduced in 12 countries on January 1. Today, 19 EU member states share the euro, representing over 340 million people and 78% of the population of the EU. The euro has also been unilaterally adopted by some non-EU member states, in what is known as euroization, including in Andorra, Kosovo, Montenegro, Monaco, San Marino, and Vatican City.

The CashMoney in physical form such as banknotes and coins. Changeover

According to the National Euro Changeover Plan adopted in December 2020, Croatia’s launching of euro notes and coins will have three phases (see Chart 1). 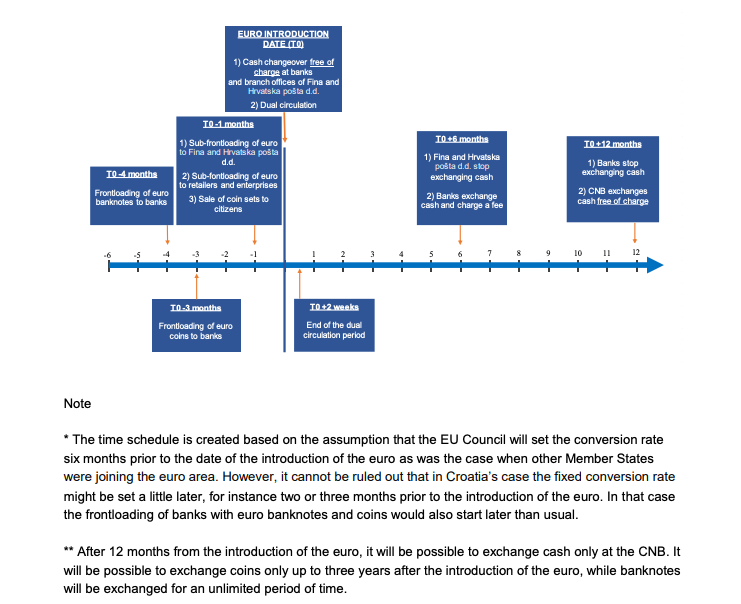 The preparatory phase will start six months before the introduction of notes and coins, with a public campaign inviting citizens to deposit surplus cash into their kuna bank accounts. It will be followed by the front-loading of banknotes and then coins first to banks and then the sub-frontloading to retailers and businesses.

The initial supply of banknotes will be borrowed from the EurosystemThe Eurosystem comprises the European Central Bank and the national central banks of those countries that have adopted the euro.. The coins, on the other hand, which feature a European and a national side, will be minted in Croatia.

The introduction of the euro banknotes and coins will mark the start of a two-week dual circulation period, during which both the euro and the kuna will have a legal tenderMoney that is legally valid for the payment of debts and must be accepted for that purpose when offered. Each jurisdiction determines what is legal tender, but essentially it is anything which when offered (“tendered”) in payment of a debt extinguishes the debt. There is no obligation on the creditor to accept the tendered payment, but the act of tendering the payment in legal tender discharges the debt. status.

After two weeks of dual circulation, Consumers will be able to exchangeThe Eurosystem comprises the European Central Bank and the national central banks of those countries that have adopted the euro. kuna, free of charge, at banks for six months and then at the central bank for up to three years from the dateThe year in which a medal or coin was minted. On a banknote, the date is usually the year in which the issuance of that banknote - not its printing or entering into circulation - was formally authorised. of introduction of the euro.