At the recent ESTA (European Security Transport Association) conference in Portugal, the Italian Cash ManagementManagement and control of cash in circulation. Company Mondialpol presented the design of a mobile cash centreProcessing centre for large volumes of cash, often in facilities that have special security and logistic characteristics. Cash centres can be operated by a central bank or a commercial entity (usually bank or a cash-in-transit company)., which could rapidly be set up in case of a natural disaster or a crisis.

The project was initiated in 2013, when the Bank of Italy set up a working group to study a co-operative approach to business continuity, in the cashMoney in physical form such as banknotes and coins. area. A National Committee was established and they collated data on available resources, in the case of a crisis. However one issue was identified: what if a cash centre is actually involved in the crisis and unable to function ?

Italy has faced several crises recently including deadly earthquakes. floods but also the bankruptcy of cash-in-transit companies in 2013.

The working group came up with two solutions:  firstly, they identified buildings and back-up structures where operations could be transferred; secondly, they proposed to design a mobile cash centre.

Mondialpol, which operates 14 cash centres in Italy has opted to further study the design for a mobile cash centre. 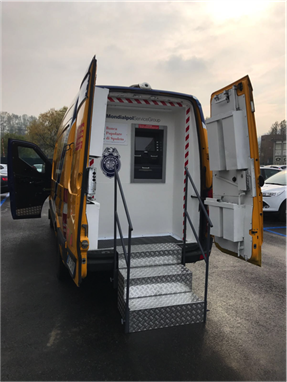 The solution is based on three standard containers, which makes it flexible and easy to transport. The first container includes the entrance, a transfer safeSecure container for storing money and valuables, with high resistance to breaking and entering. and workstations for in- and outflows; the second accommodates 8 counting and authenticationThe process of proving that a banknote or security document is genuine. positions; the third hosts the vaultSafe; strong room. A place reinforced with special security measures where high-value objects and documents are safeguarded. In central banks, banknotes and other objects are safeguarded in vaults. and a WC. The centre is modular and other features can be added: mobile ATMs installed on dedicated armoured trucks (pictured opposite); a ‘Bank on the Road’ truck which is an armoured vehicleA vehicle armoured with iron or steel plates that protect the people and objects inside. fitted with smart safes, that can collect deposits from retailers and deliver them to the mobile cash centre.

The mobile cash centre is also equipped with support systems and devices such as CCTV, access control, server, LAN and wifi, security systems, air conditioning, WC, which enable it to operate autonomously and in accordance with security standards, throughout the emergency.

The activation of the MCC can take place within 48h. It is sustained by support functions such as: