Categories : Cash is efficient, Costs of cash versus costs of electronic payment instruments
Tags : Asia, Cash, Central Bank, Freedom
BOJ worried about the growth of cash usage as it undermines its desire to raise interest rates, but at least consumers have a choice about how to manage their money.
Communication Team / Equipo de Comunicación
view more articles

According to figures of the Bank of Japan (BOJ), the demand for banknotes has inexorably been rising in the country over the past years and has doubled since 1997. Inversely, economic and population growth have both slowed down. The chart here below demonstrates the increase of cash in circulationThe value (or number of units) of the banknotes and coins in circulation within an economy. Cash in circulation is included in the M1 monetary aggregate and comprises only the banknotes and coins in circulation outside the Monetary Financial Institutions (MFI), as stated in the consolidated balance sheet of the MFIs, which means that the cash issued and held by the MFIs has been subtracted (“cash reserves”). Cash in circulation does not include the balance of the central bank’s own banknot... More versus Japan’s GDP growth since December 2012. 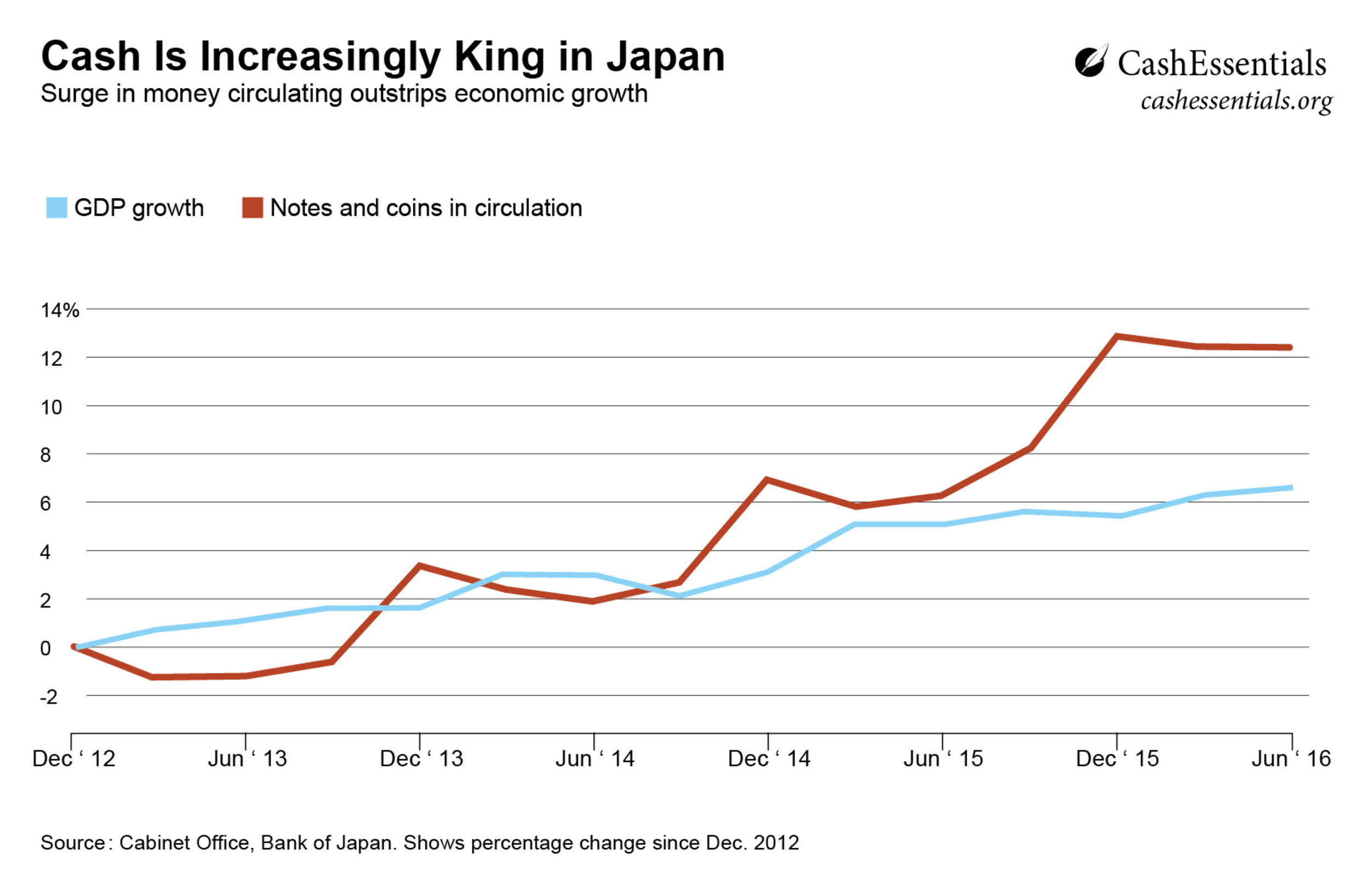 About $966 billion notes were circulating in Japan in October 2016. Furthermore, cashMoney in physical form such as banknotes and coins. More was used for 80% of transactions by value in 2014, despite the rapid adoption of digital technologies such as Apple Pay. In comparison, South Korea used paperSee Banknote paper. More moneyFrom the Latin word moneta, nickname that was given by Romans to the goddess Juno because there was a minting workshop next to her temple. Money is any item that is generally accepted as payment for goods and services and repayment of debts, such as taxes, in a particular region, country or socio-economic context. Its onset dates back to the origins of humanity and its physical representation has taken on very varied forms until the appearance of metal coins. The banknote, a typical representati... More for less than 20% of payments and Singapore for about 45%.

Nevertheless, this passion for cash embarrasses the BOJ in the implementation of its monetary policies. Indeed, any attempt to impose lower negative interest rates will most probably encourage the population to withdraw all their money from the financial system to store it in the form of notes under their mattress. In the same vein, the central bank of Sweden recently affirmed that lowering interest rates below zero is much easier in a cashless society. Sweden’s rates are currently negative 0.5, an impossible rate for Japan, as former BOJ board member Sayuri Shirai stated. Yet, it also shows that consumers have the freedom to choose their preferred method of paymentA transfer of funds which discharges an obligation on the part of a payer vis-à-vis a payee. More and, thanks to the existence of cash, they can avoid being charged by banks for storing their money – an impossible feat in a cashless society.