The Blessing of Cash

A few weeks ago, The Economist published an article entitled Why some economists want to get rid of cashMoney in physical form such as banknotes and coins.. The article starts by reminding the reader that “CASH is one of mankind’s greatest inventions; a vast improvement, one would imagine, on carting around sheep or bales of hay.” However, the article cites Harvard Professor Kenneth Rogoff’s latest book “The Curse of Cash”, in which he makes the case for gradually getting rid of cash, as the benefits are now outweighed by the risks.

This is not the first time Harvard targets cash. In April, Larry Summers, President Emeritus of Harvard University, former U.S. Treasury Secretary and member of the Board of Square – a mobile-payments start-up – called for the abolishment of the €500 banknote. And in February, Peter Sands, former Head of Standard Chartered Bank and senior fellow at Harvard published a paperSee Banknote paper. Making it Harder for the Bad Guys: The Case for Eliminating High Denomination Notes.

So why are Harvard academics so concerned about the future of cash, or rather its absence in the future? Prof. Rogoff summarized his arguments in the Wall Street Journal.

The first argument, says Rogoff, is that “paper currencyThis is often used as a generic expression to refer to banknotes, versus the “metal currency” expression, which refers to coins., especially large notes such as the U.S. $100 bill, facilitates crime.”

According to MasterCard, cash accounts for 85% of global consumer transactions. It is undeniable that some of those transactions involve criminal activities. But does that justify eliminating banknotes for the vast majority of perfectly legitimate transactions? After all, criminals also drive cars, use electricity and drink water. Also, the stereotype of drug dealers sortingProcess of fitness sorting of banknotes by their condition of use. Through this process, used banknotes are classified as fit or unfit to return into the circulation. See Processing of banknotes. banknotes in a haze of smoke may be somewhat outdated.  In 2015, a Columbia University student was arrested on drug charges; the transactions were settled via social paymentA transfer of funds which discharges an obligation on the part of a payer vis-à-vis a payee. application Venmo. According to the Global Drug Survey 2016, 60% of drugs in the UK are bought online.

The second argument is not new either: “Cash is also deeply implicated in tax evasion.”

Tax evasion is undeniably a sizeable issue. In the 2014 documentary The Price we Pay, it was estimated that approximately $22,000 billion or 10% to 15% of global financial wealth were held in tax havens. This represents around 20 times the value of U.S. currencyThe money used in a particular country at a particular time, like dollar, yen, euro, etc., consisting of banknotes and coins, that does not require endorsement as a medium of exchange. in circulation. In other words, tax evasion associated with cash is only the visible tip of the iceberg.

In France, the former Budget Minister is currently facing charges of tax evasion and money launderingThe operation of attempting to disguise a set of fraudulently or criminally obtained funds as legal, in operations undeclared to tax authorities, and therefore not subjected to taxation. Money laundering activities are strongly pursued by authorities and in most countries, there are strict rules for credit institutions to cooperate in the fight against money laundering operations, to declare and report any transactions that could be considered suspicious.. No cash was involved: he is accused of hiding his wealth in tax havens around the world. In Spain, the former managing director of the International Monetary Fund is standing trial with 65 other former bank executives over allegations of misusing corporate credit cards for personal expenses.

Furthermore, an increasing number of countries seem to share Rogoff’s view and have imposed restrictions on cash payments. However, there is no correlation between the size of the shadow economy and the value of cash in circulationThe value (or number of units) of the banknotes and coins in circulation within an economy. Cash in circulation is included in the M1 monetary aggregate and comprises only the banknotes and coins in circulation outside the Monetary Financial Institutions (MFI), as stated in the consolidated balance sheet of the MFIs, which means that the cash issued and held by the MFIs has been subtracted (“cash reserves”). Cash in circulation does not include the balance of the central bank’s own banknot..., as illustrated by the chart below. Austria, which has the smallest shadow economy in Europe, is a cash-intensive economy. On the other hand, Sweden, which is often considered  as being at the forefront of cashlessness, has a shadow economy, which is 60% higher than Austria. 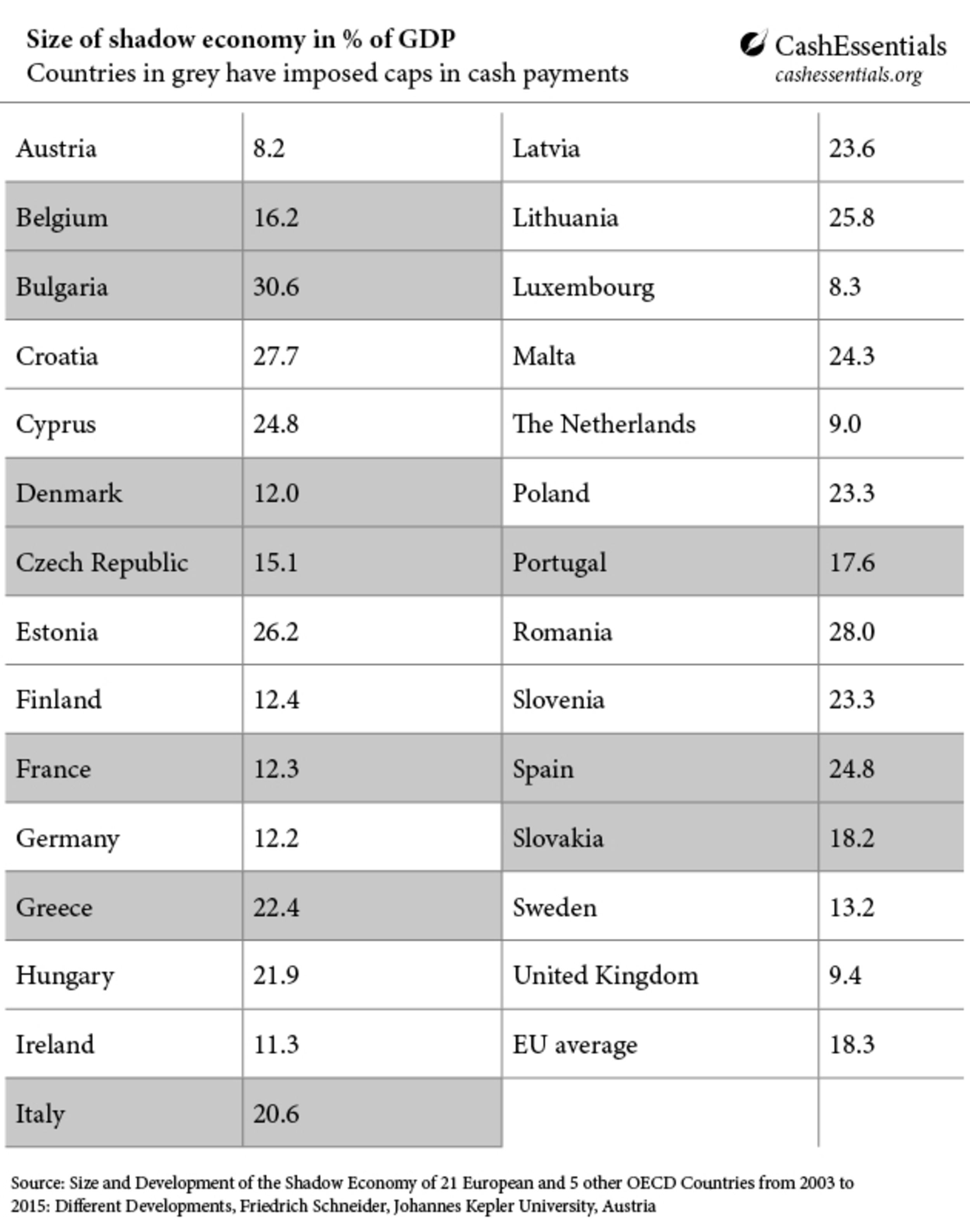 The third argument is more surprising. “Cash also lies at the core of the illegal immigration problem in the U.S.”

Immigrants are heading to the US because of cash? Really? If that were the case, why are immigrants heading for Sweden? According to Sweden.se, an official Swedish website, over 160,000 people sought asylum is Sweden in 2015, twice as many as in 2014. According to the OECD, Sweden has welcomed more refugees than any other European country in relation to its population.  And yet, less than 20% of retail transactions were made using cash in 2014. And the highest denominationEach individual value in a series of banknotes or coins. is worth $117.

But Rogoff argues he is advocating “a “less-cash” society, not a cashless one, at least for the foreseeable future.” In other terms, he recommends getting rid of high-denomination notes. In the US, this means phasing out the $100, the $50 but also the $20 bills.

This would indeed make it more costly for criminals and tax evaders to carry and store large amounts. But it would also increase the cost of cashAlthough banknotes are delivered to the citizens free of charge and their use does not involve a specific fee, costs are generated during their manufacturing, storage and circulation process, which are covered by different social agents (central banks, commercial banks, retailers etc). for society. Moreover, it could have a knock-on effect on the cost of electronic payments. When the European Competition Authority regulates the cost of payment card fees, they use a methodology known as the Merchant Indifference Test. The test ensures that merchants do not pay higher charges when they accept a card than when they accept a cash payment. By increasing the cost of cash, card schemes are incentivized to increase their fees.

High denominations play an important role in transactions. According to the Federal Reserve Diary of Consumer Payment Choices, the share of transactions of $100 and over settled in cash reached 11% in 2015, up from 9% in 2012. According to the ECB household survey on the use of cash, 20% of purchases between €200 and €1,000 are paid in cash. And 4% of respondents use cash for purchases of over €10,000! And this is perfectly legitimate.

And then there is the argument of negative interest rates. “In principle, says Rogoff, cutting interest rates below zero ought to stimulate consumption and investment in the same way as normal monetary policy, by encouraging borrowing.” Unfortunately, cash prevents this, as savers would withdraw their savings in cash rather than watch them shrink.

Maybe cash is actually an enabler of negative interest rates. In all the countries mentioned above, there has been a relative increase in cash in circulation, however none has experienced a bank run. And perhaps that the ability for savers to withdraw their funds in cash, should rates go too low, is the reason why they don’t. In the absence of cash, as soon as interest rates dropped below zero, savers would instantaneously switch to other investments including, for instance, foreign currencies, commodities or virtual currencies.