Categories : Cash is also a store of value, Cash is universal
Tags : Cash, Store of value
The BIS quarterly review shows that cash in circulation has grown from 7% of GDP in 2000 to 9% in 2016.
Communication Team / Equipo de Comunicación
view more articles

The Bank of International Settlements (BIS) published its quarterly review this week indicating that cash in circulationThe value (or number of units) of the banknotes and coins in circulation within an economy. Cash in circulation is included in the M1 monetary aggregate and comprises only the banknotes and coins in circulation outside the Monetary Financial Institutions (MFI), as stated in the consolidated balance sheet of the MFIs, which means that the cash issued and held by the MFIs has been subtracted (“cash reserves”). Cash in circulation does not include the balance of the central bank’s own banknot... More continues to grow, even in the most advanced economies. Despite the growth of card payments (that are also used for mobile payments), people’s appetite for cashMoney in physical form such as banknotes and coins. More has not slackened. One of the explanations given by the report is cash’s store of valueOne of the functions of money or more generally of any asset that can be saved and exchanged at a later time without loss of its purchasing power. See also Precautionary Holdings. More property that seems to have become particularly attractive following the financial crisis of 2008.

Cash usage is up from 7% to 9% of GDP since 2000 in Committee on Payments and Market Infrastructures (CPMI) member countries, with the largest increases being recorded in Hong Kong and Japan (by 9% and 7% of GDP, respectively). 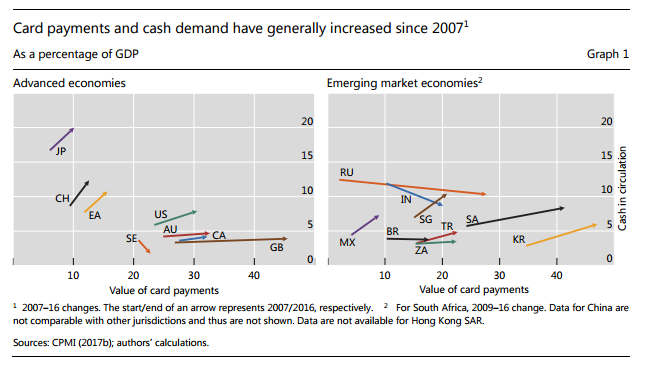 Card and cash payments have been progressing in most countries except in Russia and Sweden where card usage has surpassed that of cash.

“The resilience of cash as a social institution reminds us of the importance of understanding the economic functions of moneyFrom the Latin word moneta, nickname that was given by Romans to the goddess Juno because there was a minting workshop next to her temple. Money is any item that is generally accepted as payment for goods and services and repayment of debts, such as taxes, in a particular region, country or socio-economic context. Its onset dates back to the origins of humanity and its physical representation has taken on very varied forms until the appearance of metal coins. The banknote, a typical representati... More, beyond just the innovations in technology,” stated BIS economic advisor Hyun Song Shin. And contrary to what cashless advocates want to make people believe, cold-hard cash continues to offer important advantages that are unequaled by other paymentA transfer of funds which discharges an obligation on the part of a payer vis-à-vis a payee. More methods, making it an central pillar of world economies.