While branches have collapsed, ATMs have diminished by 20%. Spain is the second country in the Eurozone regarding ATMs per inhabitant after Austria, with 115 cashMoney in physical form such as banknotes and coins. access points per 100,000 people. Spanish banks have responded to the loss of physical infrastructure and human capital by embracing digitalization, promoting electronic and online banking channels, and ATMs with biometric standards. 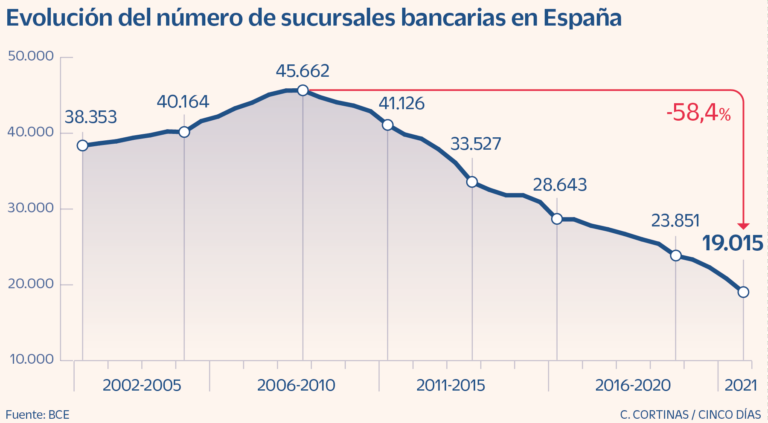 “The coronavirus pandemic has provided the perfect excuse for banks and other institutions to force people to stay away, act like robots, and at the same time they have forced customers to do the work that used to be done by bank employees.” – Carlos San Juan

As a 78-year-old medical doctor in Valencia, Spain, Carlos San Juan de la Orden is used “to seeing pain and suffering.” The Covid-19 pandemic reduced his access to the branches of BBVA and La Caixa (his bank since 1969). He could only get help by phone, and he could meet bank employees only for urgent matters. Many branches maintained their pandemic hours long after stringent lockdowns ended. Banks would only receive customers through 11 am, and even then, only with appointments.

“Banks need pensioners’ moneyFrom the Latin word moneta, nickname that was given by Romans to the goddess Juno because there was a minting workshop next to her temple. Money is any item that is generally accepted as payment for goods and services and repayment of debts, such as taxes, in a particular region, country or socio-economic context. Its onset dates back to the origins of humanity and its physical representation has taken on very varied forms until the appearance of metal coins. The banknote, a typical representati..., but that would have to mean they have to act as a public service. If not, the government would have to provide us with another way to receive this money that is ours. You can’t ask old people to stand in line for hours in the blazing sun or rain to withdraw their savings.” – Carlos San Juan

According to the National Statistics Institute (INE), Spain had 9.31 million people 65 years and older in 2021, nearly 20% of the population (47.4 million Spaniards). Seniors suffer the most from the digital gap and the digitalization of banking services.

San Juan adapted as well as he could, having experience with IT, Whatsapp, and Skype. Yet, he felt increasingly alienated and fed up. “My head is fine. I’m not an idiot, but I have Parkinson, and sometimes I press the wrong button,” said San Juan.

In December 2021, San Juan felt aggravated. “Politely, [Caixa employees] informed me that I could changeThis is the action by which certain banknotes and/or coins are exchanged for the same amount in banknotes/coins of a different face value, or unit value. See Exchange. banks if I wasn’t happy. I’ve had my money in the same bank for 51 years, since I got my first paycheck, and it bothers to realize that the digital world has dehumanized us to such an extent that loyalty is no longer worth anything,” said San Juan.

The retiree started collecting signatures among his friends, requesting banks to keep their offices open throughout the day without an appointment for customers to withdraw cash and pay their bills. After getting 100 signatures, San Juan started a Change.org campaign called “SoyMayorNOIdiota” (“I’maSeniorNOTanIdiot”). There, he wrote:

I am almost 80 years old, and it saddens me greatly to see that banks have forgotten about older people like me. Now virtually everything is online… and not all of us understand each other with the machines. We don’t deserve this exclusion. […] This is neither fair nor humane. […]  Many seniors are alone and have no one to help them, and many others, like me, want to remain as independent as possible, even at our age. […]  I have felt humiliated when asking for help at a bank and being talked to like I was an idiot for not knowing how to complete a transaction. And I’ve seen that lousy treatment directed at other people. It hurts a lot to feel that way. We older adults exist, many of us, and we want to be treated with dignity. We are just asking for sections to be set up in the branches where they stop excluding us.

San Juan’s petition became viral, and 647,841 people signed it. Many teenagers and young adults found San Juan’s campaign inspiring. “We generated sympathy in many young people, starting with my granddaughters who view my state of health with great concern, and many other young people who have a relative who does not know how to use apps, and in some cases can’t even afford to buy a smartphone,” said San Juan.

“We have realized that senior adults, even in urban areas, are not getting the service they deserve. […] It is our priority to accompany and support the most vulnerable people, especially older people. [Banks must] guarantee personalized treatment, [so] that you feel well treated, loved, respected. […]. Digitalization must be a humanistic process that puts people at the center and cannot leave out a part of society. […] We would not be a strong society worth living in if we do not accompany and love our elders.” – Nadia Calviño, Spain’s minister for the economy and digital transformation

José María Roldán, president of the Spanish Banking Association, thanked San Juan during the ceremony. “We have seen that new measures were needed not to leave these vulnerable groups behind,” said Roldán.