27 June is World ATM Day. On this day fifty-five years ago, the world’s first 24/7 CashMoney in physical form such as banknotes and coins. Machine, or ‘Automated Teller Machine’ as it was later to be more formally known, was unveiled in London to an unsuspecting British public.

To celebrate, the ATM Appreciation Society (ATMAS) has selected ‘The World’s Smallest ATM’ as its ‘Extreme ATM of the Year 2022’. 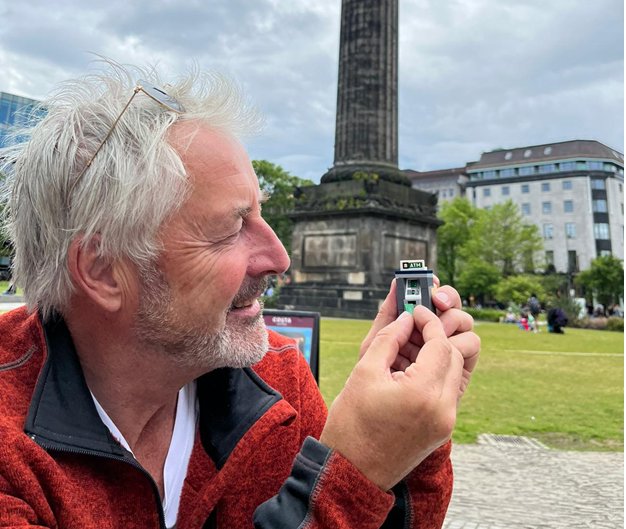 James Shepherd-Barron, founder of The ATM Appreciation Society and son of the ATM’s inventor, with the ‘World’s Smallest ATM’ in St. Andrew’s Square, Edinburgh, 16 June 2022.

Invented by a Scotsman, it was appropriate that the ATM Appreciation Society’s founder, son of the ATMs inventor, John Shepherd-Barron, announced it in St. Andrew’s Square, the financial centre of Edinburgh.

“I started the ATM Appreciation Society in honour of my Dad,” said James, brandishing a small Lego model of an ATM. “But [I] did so to make a serious case for cash and cash machines in a non-serious way.”

“The public take ATMs for granted,” he explained, “without realising the good they do for society, especially societies in crisis.”

“It’s not just that cash limits the extent to which governments control our behaviour or banks from exploiting us,” he went on, “but that, in disaster zones like Ukraine right now, ATMs are critical to the aid effort. Without access to ATMs, Ukrainian refugees would not be able to convert their digital humanitarian donations into cash. And without cash, they wouldn’t be able to pay for anything.”

The ATM Appreciation Society (ATMAS) was founded by James Shepherd-Barron, son of the Automated Teller Machine’s inventor, in 2017 on the occasion of the machine’s 50th anniversary. Its purpose is to inform the general public about the role ATMs play in society and how they have a social utility far beyond that suggested by their clunky exterior, specifically the threat to democracy posed by a cashless world. See https://atmas.org for more.

James is a disaster risk management consultant and CEO of The Aid Workers Union (see https://aidworkersunion.org). Amongst other things, he advises governments, the UN and international aid organisations on how to disburse financial assistance in times of crisis.