Ireland: AIB Reverses Decision to Remove Cash from a Third of its Branches

On July 19, Irish bank AIB announced a €40 million investment programme, which included repurposing 70 of its 170 branches to boost account-opening facilities while withdrawing cashMoney in physical form such as banknotes and coins. More and cheque services. Only three days later, AIB backtracked, saying it had “decided not to proceed with the proposed changes to its bank services,” acknowledging “customer and public unease.”

The bank, in which the Irish State owns a majority stake, had said that it “recognises the importance of customers having cash in their community”. It argued that customers had continued access to cash through the nationwide network of 4,000 ATMs. Thanks to an arrangement between the bank and An Post, they could also access cash at 920 post office branches. The bank added that the majority of the 25,000 point-of-sales locations, nationwide provide cashbackA service whereby the customer pays electronically a higher amount to a retailer than the value of the purchase for goods and/or services and receives the difference in cash. It is also a reward system associated with credit card usage, whereby the consumer receives a percentage of the amount spent on the credit card. More.

Alternative Channels Are Not Enough

These alternative channels are, however, far from sufficient. The ATM network in Ireland peaked in 2014 and has since shrunk by over 20% (see Chart below). In 2012, AIB had 240 bank branches and is down to 170 today. The general secretary of the Irish Postmaster’s Union has said in the Irish Times that the Government would have to invest in post offices if they were in a position to provide cash services no longer available at AIB branches.  As for cashback, its use is limited and applies primarily to low-value withdrawals. Importantly, it does not provide a solution for cash deposits. 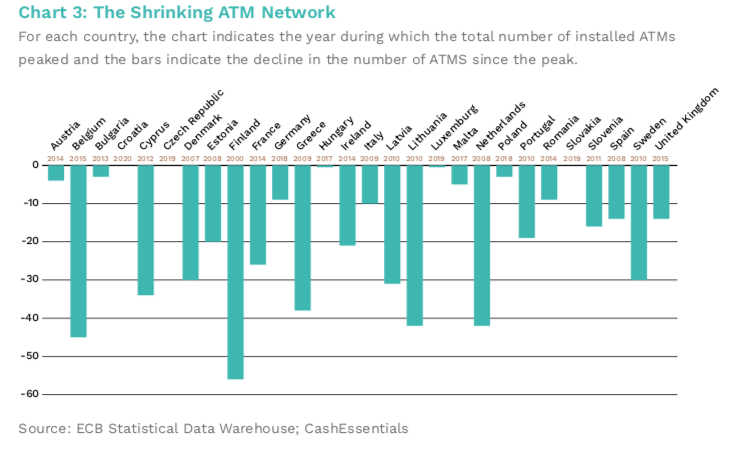 A pub-owner in Clifden (Co Galway) explained to the Irish Times that the bank’s move would force him to travel 65 km to deposit and withdraw cash, representing a three-hour round trip. “It kind of beggars belief that AIB thought this approach was going to be workable. This is a huge relief, would cut down on the extra administrative work, and time and effort.” said Damien Joyce, owner of Lowry’s Bar.

The initial announcement triggered considerable backlash, from consumers, business groups, farmers and politicians, eventually resulting in the cancellation of the project. The Taoiseach (Irish Prime Minister) had summoned the head of AIB to a meeting next week, inviting him to “reconsider and reflect” on its decision. and while politicians from all parties called for the bank to appear before the finance committee. The Central Bank said that vulnerable customers should have full access to basic banking services.

The cancellation of the project was welcomed by customers and politicians. Minister for Finance Paschal Donohue said “Banks have a key role in maintaining the flow of cash through the economy and ensuring appropriate to retail banking services for all in society, including the vulnerable. I note the significant public reaction AIB’s announcement earlier this week, and I welcome the bank’s decision not to proceed with the proposed changes to customer services in certain branches.”

An Example for Others

The case of AIB is far from unique. Banks are reducing their cash footprint across the majority of mature economies. Preserving the existing infrastructure is, however, not enough.  Stakeholders, including governments and central banks, also need to consider how they can develop alternative channels to guarantee access to cash in a viable and sustainable way.