The French Are Fond of Cash

Categories : Cash connects people, Cash does not require a technology infrastructure, Cash enables an immediate transfer of value, Cash is a social network
Tags : Cash, Consumers, Contingency, France
Consumer research shows that cash payments are firmly rooted in French society. Cash is an enabler of social connections and is the preferred form of payment at small shops and for charity.
Guillaume Lepecq
view more articles

According to qualitative and quantitative studies performed by the consumer research institute IFOP for the Monnaie de Paris, in February and April 2021, the French are firmly attached to cashMoney in physical form such as banknotes and coins., even after the Covid-19 pandemic.

91% of the French population say they regularly use cash, while 70% say they use it daily. This regular use does not seem specific to a particular group but concerns all socio-demographic profiles. Only 9% say they do not use cash.

Cash remains the preferred means of paymentA transfer of funds which discharges an obligation on the part of a payer vis-à-vis a payee. for daily transactions (87% use it for purchases in small shops, 72% for vending machine purchases) and for all types of donations. This reliance on cash is not a default choice; in more than 70% of cases, people paid in cash because they did not wish to use digital payment options.

The French see many functional advantages in using cash: lack of commissions (95%), facilitating private transactions (94%), universality (93%), protecting private life (92%) and security (91%). Besides its practical aspects, the tangibility makes it a means of transmitting the value of moneyFrom the Latin word moneta, nickname that was given by Romans to the goddess Juno because there was a minting workshop next to her temple. Money is any item that is generally accepted as payment for goods and services and repayment of debts, such as taxes, in a particular region, country or socio-economic context. Its onset dates back to the origins of humanity and its physical representation has taken on very varied forms until the appearance of metal coins. The banknote, a typical representati... to young people (92%). It also represents the transmission of a culture, a country’s identity, heritage, and shared values (80%).

Correlation analysis carried out during the study shows that the symbolic dimensions that cash embodies feed people’s attachment to it.

Cash is a Safeguard against a Fully-Digital World

Compared to other forms of payment, cash gathers the highest level of trust: 61% say they have a lot of confidence in cash, vs 47% for payment cards (see Graph 1). 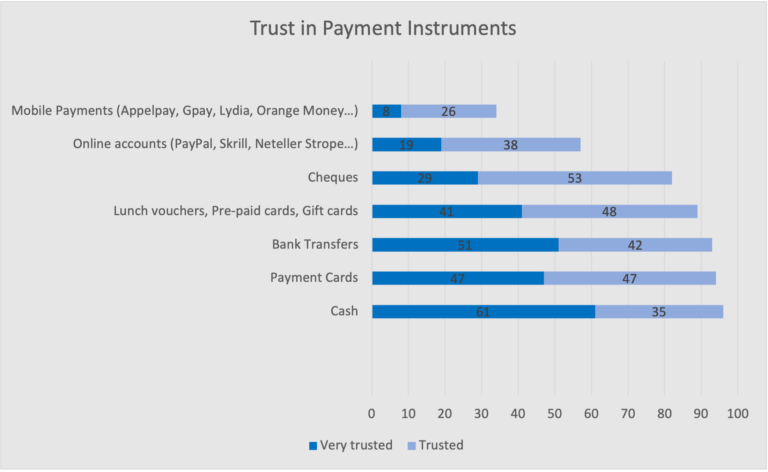 Cash is an Enabler of Social Connections

Cash distinguishes itself through the trust placed in it by users, its reliability, its ‘humanity’, its effectiveness (the highest-rated form of payment on this criterion) and its ease of use (rated second after bank cards). On the other hand, digital forms of payment meet with mixed reactions. While their functional advantages are recognised (time-saving – 89%; simplicity – 72%), respondents were equally worried by their discriminatory nature (exclusion of a part of the population – 90%) and the lack of transparency in the digital payment ecosystem (83%).

Envisioning a world without cash incited more fear than enthusiasm: 86% thought their private lives would be subject to more surveillance, and 80% thought there would be less solidarity. 83% of respondents said they were worried about the disappearance of cash. This feeling is common among daily users of cash payment (87%) but is also strong among those who primarily use digital forms of payment (73%).

As for the abolition of 1 and 2 centFraction of a currency representing the hundredth of the unit of account. coins which has led to controversy within European institutions, a slight majority of French citizens (51%) are opposed, saying they are still attached to small coins. This abolition is seen as a possible step toward price increases caused by policies of rounding up.

‘This study confirms the attachment of the French population to cash payment despite the development of digital alternatives. Freedom of choice concerning forms of payment remains at the backbone of trust in cash more than ever before. The study also shows that physical currencyThe money used in a particular country at a particular time, like dollar, yen, euro, etc., consisting of banknotes and coins, that does not require endorsement as a medium of exchange. is seen as easy and practical and an enabler of social connections. Beyond its daily usage, cash continues to play a role in our society concerning intergenerational transmission, pedagogy, and solidarity,” said Marc Schwartz, President and CEO of the Monnaie de Paris.