Ukraine: Cash and Remittances in Times of War

Categories : Cash and Crises, Cash does not require a technology infrastructure, Costs of cash versus costs of electronic payment instruments
Tags : Access to cash, Digital payments, Europe, remittances, Ukraine
Ukraine has managed to secure its cash supply chain despite the war with Russia. Remittances have not increased sensibly, flowing to neighboring countries where refugees have settled.
Manuel A. Bautista-González
view more articles

Securing the CashMoney in physical form such as banknotes and coins. Supply Chain

Ukraine’s financial system and cash infrastructure have continued to operate despite the war with Russia. The banking sector has managed a spike in cash withdrawals and conversions from hryvnia to U.S. dollars and euros.

The annual growth rate of cash in circulation was 19.9% in February 2022, when the invasion started; it peaked at 23.7% in March 2022 and has decreased since then (see Graph 1). The National Bank of Ukraine (NBU) asserts that the banking system operates in stable conditions, with over 1,500 branches and more than 3,800 ATMs, despite Russia’s bombings targeting critical infrastructure.

Graph 1. Ukraine: CurrencyThe money used in a particular country at a particular time, like dollar, yen, euro, etc., consisting of banknotes and coins, that does not require endorsement as a medium of exchange. in Circulation (billions of hryvnias), January 2021-September 2022 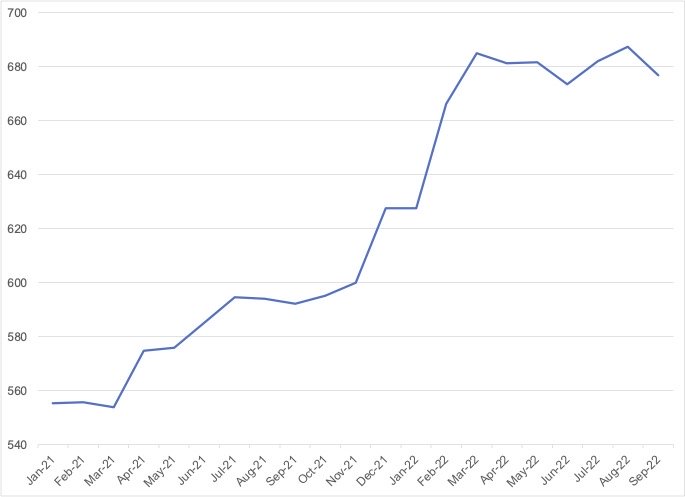 Shortly after the invasion started, the NBU fixed the hryvnia’s exchange rateThe rate at which one currency will be exchanged for another., imposed capital controls, and established swap agreements with other central banks. To prevent a bank run, the NBU announced it would provide unlimited hryvnia cash and loans to ensure banks could meet withdrawals. Bank workers have changed their delivery routes and times, and even the vehicles, to ensure the well-functioning of the cash supply chain:

It is really difficult to deliver cash. On the road, you will for sure be under fire. This is very dangerous. Our people there show that they are really brave. In some cases, they do things like a hero, trying to transfer cash if it is not possible, even by using [a boat to cross the river because the bridge had been bombed] in order to bring moneyFrom the Latin word moneta, nickname that was given by Romans to the goddess Juno because there was a minting workshop next to her temple. Money is any item that is generally accepted as payment for goods and services and repayment of debts, such as taxes, in a particular region, country or socio-economic context. Its onset dates back to the origins of humanity and its physical representation has taken on very varied forms until the appearance of metal coins. The banknote, a typical representati... to allow people to get payments. […] I mean, who is prepared for such this scale of war? But together with team, with people, with support, I mean, we are working. We are working, and it is not easy, but this is our reality. We have to work. – Serhii Naumov, CEO of Oschadbank, Ukraine’s second-largest bank.

The International Monetary Fund gave the Ukrainian government a $1.4 billion loan in early March to meet its spending needs.

Before Russia’s invasion, Ukraine was already the largest recipient of remittances in Europe and Central Asia, with $18.2 billion last year. In May, the World Bank expected that remittances would increase by more than 20% this year.

However, according to NBU data, remittances grew slightly in February 2022 compared to February 2021 (0.9%), collapsed in March 2022 compared to the same month in 2021 (-21.9%), and grew modestly in September 2022 (0.7%). “You don’t see a substantial increase. You see, in fact, a little decrease,” said Susan Pozo, professor of economics at Western Michigan University.

Due to the exodus of Ukrainian refugees to other countries, remittance flows might have shifted from Ukraine to other countries. “They’re going to family members who have settled in Poland and Moldova, for instance. So those are numbers that officially are not remittances to Ukraine anymore, they’re now remittances to Poland or Moldova, but they are going to people who a few months ago were living in Ukraine,” said Dany Bahar, professor of international and public affairs at Brown University.

Lowering remittance fees by 2 percentage points would potentially translate to […] $400 million for migrants and refugees from Ukraine. The cross-border paymentA transfer of funds which discharges an obligation on the part of a payer vis-à-vis a payee. systems, however, are likely to become multipolar and less interoperable, slowing progress on reducing fees. – Dilip Ratha, head of the Global Knowledge Partnership on Migration and Development (KNOMAD) and lead author of the report “A War in a Pandemic.” 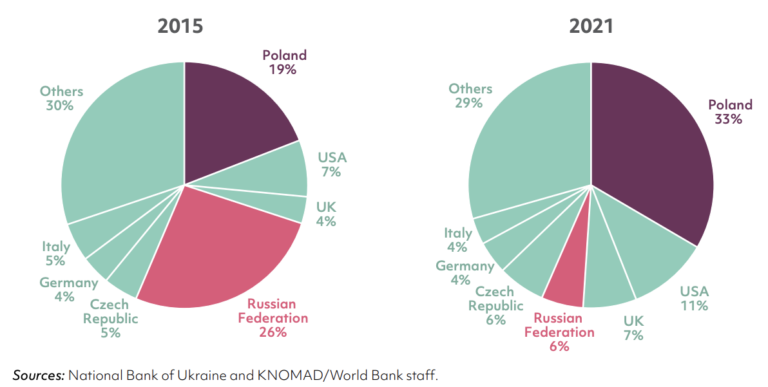 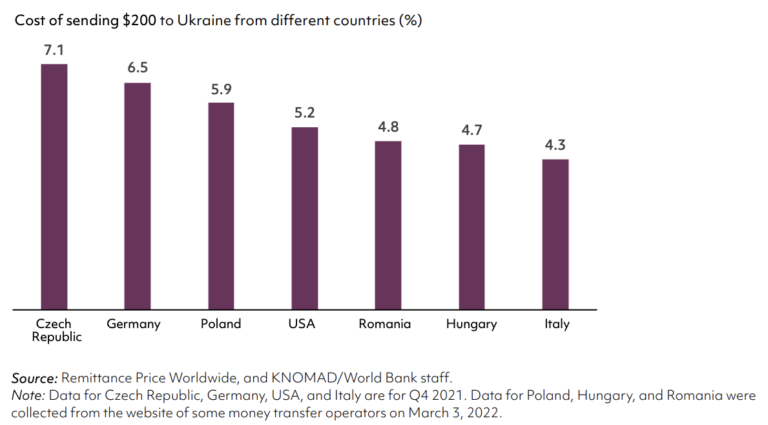 Some remittance companies have made changes to adjust to the war times. Transfers sent via Western Union can be paid out in cash at locations in neighboring countries (Poland, Romania, Slovakia, Moldova, and Hungary).

Ukrainians have been seeking alternatives. “There’s a market there, but the market wasn’t working very well,” said Caroline Theoharides, professor of economics at Amherst College.

Shortly after Russia’s invasion started, Yuliya Lopatyeva tried to send $100 to her twin brother by MoneyGram. The transfer took three days, but her brother’s bank was not working. “It doesn’t work. I can’t do any payments. I can’t send money,” Yuliya Lopatyeva said.

Now, Yuliya and her daughter Polina use Wise, an online-based service. “I honestly just Googled and I saw the website is pretty much secured. There’s two-factor verificationChecking the authenticity.. You can connect it to your bank,” said Polina Lopatyeva.