Banking on the Future of Cash

Categories : Cash is available to all users, Cash is the most widely used payment instrument
Tags : Australia, Cash, Cash substitution, Commercial bank, Covid-19
Although the world of contactless payments has exploded in Australia, for some cash remains the payment method of choice.
Jodie LeeTet
view more articles

This article was first published in ANZ Bluenotes, a publication of ANZ’s Newsroom, a forum for insights, opinion, research, and news about the economy, financial services, investment, and society from within Australia, New Zealand, and outside. It is republished with the permission of the author.

The COVID-19 pandemic has clearly accelerated the transformation of banking and payments in this digital age.

“In 2020, there was a 22 per centFraction of a currency representing the hundredth of the unit of account. More reduction in volume and 12 per cent reduction in value of cashMoney in physical form such as banknotes and coins. More withdrawals from ATMs.”

According to eminent economics professor Jeffrey Sachs, in six months, we achieved what would have normally taken 10 years in terms of adopting technology and working remotely. The more people work and buy remotely, the more comfortable they become with using digital platforms.

The paymentA transfer of funds which discharges an obligation on the part of a payer vis-à-vis a payee. More ecosystem is evolving. Contactless payments continue to rise, and cash payments diminish; debit cards are accelerating, and credit cards are declining. Even newer technologies like mobile wallets and buy now, pay later (BNPL) schemes are all rising rapidly. People are increasingly doing away with physical cards and relying on mobile phones for payments.

According to the Reserve BankSee Central bank. More of Australia (RBA), 23 percent of Australians surveyed in October 2020 said they had used cash for their most recent face-to-face purchase – down from more than 30 percent previously. 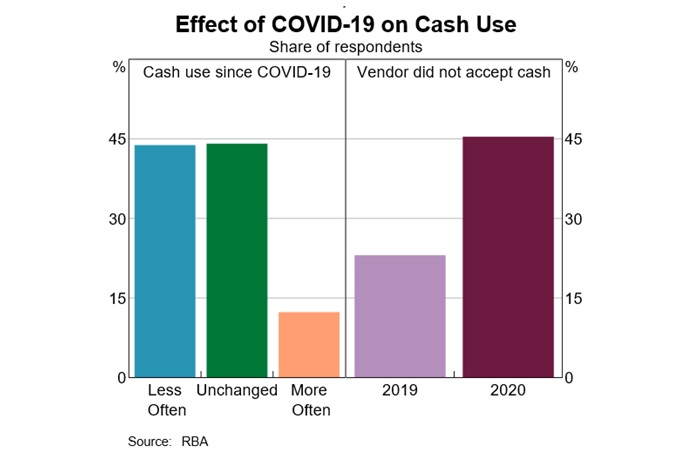 Of those who said they avoided using cash, 45 percent had come across a business that wouldn’t take it. The RBA estimates only 4 percent of businesses refuse to accept cash outright, although many more did what they could to discourage it. 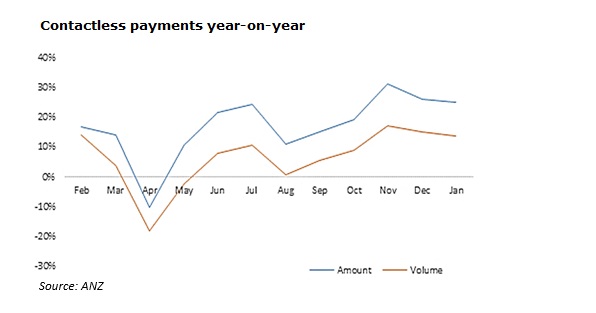 Over the same period, digital wallet payments increased by 68 percent in transaction volume and 92 percent in the transaction amount. This was mainly driven by increased spending on groceries, retail, and recreation (including restaurants, fast food, and liquor).

Over the same period, digital wallet payments increased by 68 percent in transaction volume and 92 percent in the transaction amount. This was mainly driven by increased spending on groceries, retail, and recreation (including restaurants, fast food, and liquor).

Customers also turned to banking remotely with ANZ app data between May 2020-2021, showing a 24 percent increase in total transaction volumes. Almost 440,000 customers registered for the app for the first time, and at the end of May, the bank reached 3.62 million registered users.

Logins to the app also exceeded 1.2 billion, averaging 92 million logins per month. In March 2021, the bank recorded the highest number of logins in a single month at 100.5 million.

Customers are also using internet banking to check balances, view transaction history, pay bills, transfer moneyFrom the Latin word moneta, nickname that was given by Romans to the goddess Juno because there was a minting workshop next to her temple. Money is any item that is generally accepted as payment for goods and services and repayment of debts, such as taxes, in a particular region, country or socio-economic context. Its onset dates back to the origins of humanity and its physical representation has taken on very varied forms until the appearance of metal coins. The banknote, a typical representati... More, view statements, and more. On a typical day for ANZ’s internet banking platform, we would see 2.14 million active customers (up nearly 10 percent year-on-year), 840,000 logins, and nearly $A975,000 in total transaction value.

So, it would seem at many levels the previously slow death of cash accelerated with COVID-19, right? In some ways, yes, but in other ways, no. Here in Australia, a puzzling paradox has emerged.

Despite the trends mentioned above, the levels of cash in circulation grew in 2020, and there is more cash in the system now than ever before.

Graph 3. Australia: Value of Banknotes in Circulation (2004-2021) and Net BanknoteA banknote (or ‘bill’ as it is often referred to in the US) is a type of negotiable promissory note, issued by a bank or other licensed authority, payable to the bearer on demand. More Issuance (2017-2021).

The amount of cash currently in circulation has reached $A94 billion, growing by $A11 billion during the pandemic.

So big was the demand for cash during the pandemic, the RBA opened its “contingency” distribution site twice – once in March and once in July – to send $A50 and $A100 notes to banks who requested them. At the same time, banks held back on returning poor-quality notes to the RBA if needed. According to the RBA, the value of cash in circulation – calculated as the value of notes issued over those returned – soared 13 percent during 2020.

The Value of Cash

All this begs the question: if data show use of cash in transactions is declining rapidly, then why do some people still hold onto it?

In early 2020, ANZ commissioned a review of cash logistic programs globally, highlighting the unique and valued attributes of cash.

Some of these attributes included 100 percent availability and reliability, anonymity, and direct settlementThe discharge of an obligation in accordance with the terms of the underlying contract. In e-transfers the settlement may take days, whereas cash settlements are instantaneous and irreversible. More without the need for technical infrastructure. This might go some way in explaining the continued use of cash even when provided an alternative.

The report also noted some people prefer cash for reasons of privacy, security, and convenience. Others live in areas where inadequate mobile phone coverage and frequent electricity outages make cash the most reliable way to pay. This is certainly true in Australia, where geographic isolation is a real concern in our regional and rural areas. Research by the RBA similarly found 5 percent of respondents noted no other way to pay, and 5 percent noted poor internet access.

ANZ and RBA data would suggest cash, to some degree, is still king for older Australians, those living remotely, and the vulnerable.

The RBA study also highlighted regional and remote residents were higher users of cash than metropolitan residents. Those who live in regional areas also tended to be older and have inferior internet access relative to capital city dwellers. These factors, too, are associated with higher cash use.

Similarly, lower socio-economic households had significantly higher use of cash. If cash were removed, most heavy/intermediate cash users would experience major inconvenience or genuine hardship.

Beyond that, cash is also used heavily in agriculture in regional and remote Australia – particularly through wholesale produce and livestock markets.

As a society and major bank, it is incumbent on ANZ to continue providing cash services to these customers and the businesses who serve them.

Major industry sectors, including retail, gambling, and hospitality, are still relatively heavy recipients of cash. By virtue of time, they often have well-established cash managementManagement and control of cash in circulation. More routines with their financial institution, usually involving tellers and couriers who could be staff or professional security services.

However, although most business customers are happy with the efficiency of cash, the true cost of this management remains largely hidden.

It doesn’t remain easy to measure the cost of cashAlthough banknotes are delivered to the citizens free of charge and their use does not involve a specific fee, costs are generated during their manufacturing, storage and circulation process, which are covered by different social agents (central banks, commercial banks, retailers etc). More management accurately, but there are some obvious costs such as time management, reconciliationVerification that what is stated in the documentation matches up with the reality, or that the information in two different documents coincide. More, and servicing cash. Most businesses are cognisant of the security risks that arise when dealing with cash, with most having well-managed mitigation strategies in place.

Beyond the ongoing challenges and implications of the pandemic, it’s clear cash must remain accessible as a public good and made efficient to use to ensure the older and vulnerable members of the community have access to payments. At the same time, as a sector, it’s important to collectively help all people have better access and capability with all emerging payment options.

The Bank for International Settlements sees long-term trends in a similar way.

“Looking ahead, developments could speed up the shift toward digital payments,” the BIS explains. “This could open a divide in access to payments instruments, which could negatively impact unbanked and older consumers. The pandemic may amplify calls to defend the role of cash – but also calls for central bank digital currencies.”

Globally there have been several attempts for collective solutions to servicing business and customer needs with limited success. Perhaps learning from other sectors like Uber and enhancing the way businesses of all sizes manage cash to their place of business is the key.

Despite technology and digital payment ecosystems contributing to the reduced need for cash, there will always be a need for physical money from individuals who prefer it and businesses looking to meet these customer’s needs – banks included.

This article was produced with support from Michael Daddo at The Shannon Company.