70% of Swiss payments are in cash

Categories : Cash connects people, Cash is the most widely used product
Tags : Cash, Consumers, Switzerland, Usage
The Swiss love their cash, but they also love having the freedom to choose their preferred payment method depending on the situation.
Viktoria Dijakovic
view more articles

“Around half of respondents indicated that they would continue to pay in cashMoney in physical form such as banknotes and coins. over the next few years just as often as they do today. In light of this finding, it is possible that innovative paymentA transfer of funds which discharges an obligation on the part of a payer vis-à-vis a payee. options could actually replace existing cashless payment methods rather than cash payments.” Survey on Payment Methods 2017, SNB (p.6).

Cash is the most common payment in Switzerland, a Swiss National Bank (SNB) study finds. The report focuses on Swiss consumer payment behavior. Carried out in the autumn of 2017, it’s the first of its kind for this small Alpine country.

The 2,000 Swiss surveyed were required to keep a payment diaryAn increasingly used instrument by central banks, which consists in asking a representative sample of the population to record for a certain period of time all their transactions, as well as the payment method used. Payment diaries provide a snapshot of the use of different payment instruments. They are, however, a costly tool and do not provide real-time results, but are useful for comparative purposes. where they would record all transactions over a period of seven days. Each participant was requested to specify the amount paid, the location where the payment took place and the payment tool used. Over 22,500 transactions were recorded during the survey period.

Cash usage vs other payments

From the survey results, cash is by far the most popular payment methodSee Payment instrument., used 70% of the time in terms of volume. When it comes to value, cash accounts for 45% of transactions, pointing to a preference for cash for smaller, everyday transactions. Just behind cash, comes the debit card, the second most popular tool accounting for 22% of all transactions by volume. Credit cards are used only 5% of the time.

Amount in their wallets

The Swiss like carrying cash. In fact, a Swiss person is likely to have on average CHF 133 ($135) in their wallet at any given time, in addition to two other non-cash payment tools (generally a credit and a debit card). Alternative payment methods, like payment apps and other digital payments, are not particularly popular with Swiss consumers.

It’s interesting to note that those that use cash the most are the 15-34 year-olds and the 55 and over. The Swiss are also very happy with the freedom of choice, clearly expressed as situational payers in the graph here below. Situational payers are described as “people who do not exhibit a fixed preference in their choice of payment method and who use either cash or non-cash depending on the situation  in question are classified as situational payers” (p.10).

And once again, it is clear that the lower the income, the higher the preference for cash. 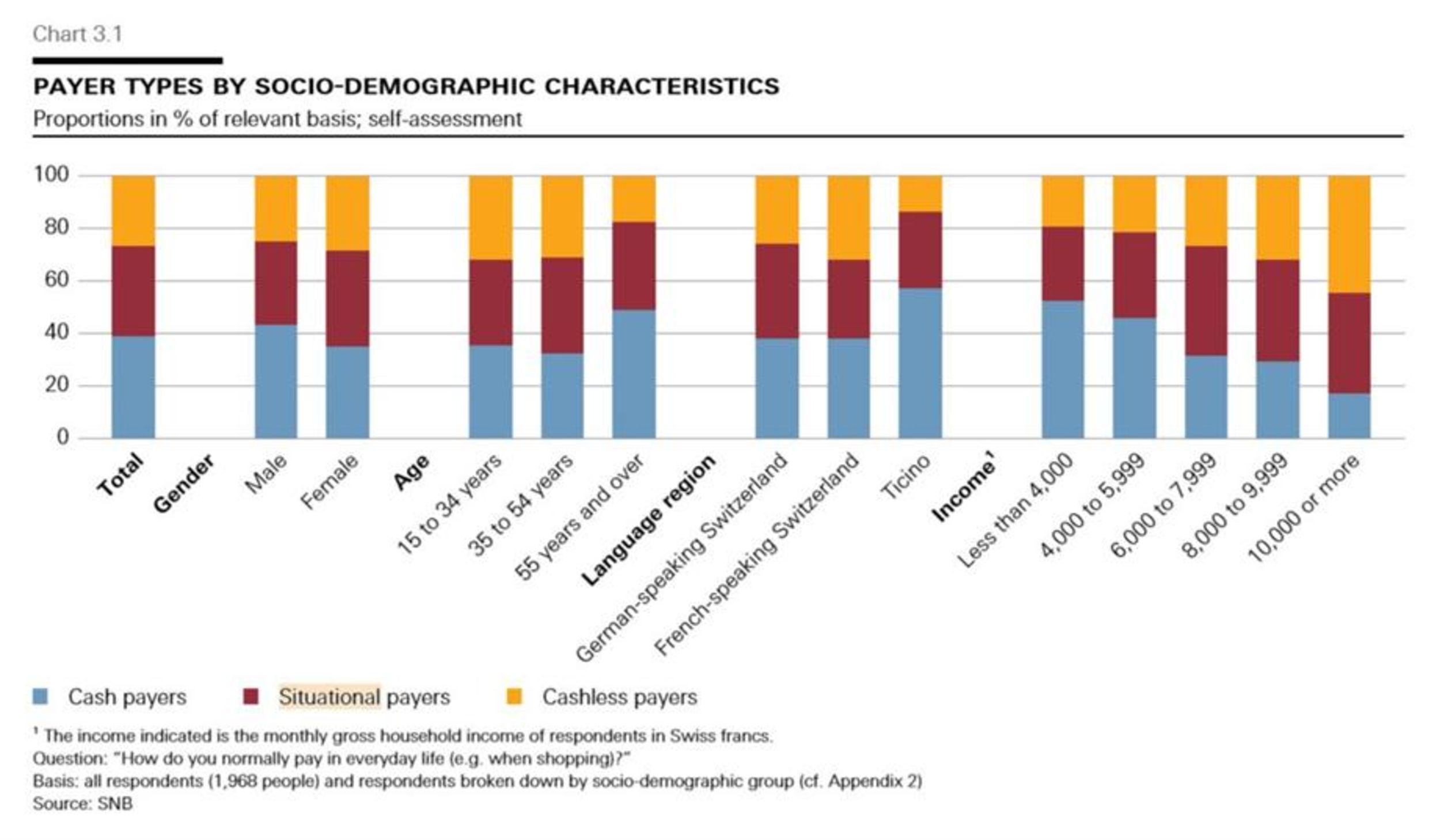 DenominationEach individual value in a series of banknotes or coins. mix

The most popular denominations are the CHF 10 and CHF 20.

Store of valueOne of the functions of money or more generally of any asset that can be saved and exchanged at a later time without loss of its purchasing power. See also Precautionary Holdings.

Swiss people like to have cash on hand, and that’s main reason cited for keeping some at home. 37% of Swiss households have some at home, but usually less than CHF 1,000.