Payments expert Sandipan Chakraborty founded Sonect in Zurich, Switzerland, in 2016. Sonect converts retailers into “virtual ATMs.” After downloading the app, users add moneyFrom the Latin word moneta, nickname that was given by Romans to the goddess Juno because there was a minting workshop next to her temple. Money is any item that is generally accepted as payment for goods and services and repayment of debts, such as taxes, in a particular region, country or socio-economic context. Its onset dates back to the origins of humanity and its physical representation has taken on very varied forms until the appearance of metal coins. The banknote, a typical representati... to their Sonect wallet. When they need cashMoney in physical form such as banknotes and coins., they locate shops through the app, request funds, and receive a barcodeMethod for encoding information, which can be read by machines. Barcodes store information using a combination of printed parallel lines (bars) and in the spaces that are left between them. Reading stored data is performed using optical readers. to withdraw funds. Sonect brings retailers new customers and reduces cash distribution costs for banks.

This license will now massively accelerate our market entry. It also allows us to launch new and affordable financial products and services across Mexico and increase financial inclusionA process by which individuals and businesses can access appropriate, affordable, and timely financial products and services. These include banking, loan, equity, and insurance products. While it is recognised that not all individuals need or want financial services, the goal of financial inclusion is to remove all barriers, both supply side and demand side. Supply side barriers stem from financial institutions themselves. They often indicate poor financial infrastructure, and include lack of ne... among the population. – Sonect

Sonect has partnered with Arca Continental, Yomp, and the National Association of Breadmakers (CANAINPA), to persuade unbanked businesses, such as small stores (“tienditas”), to become virtual ATMs.

Sonect applied for a license to operate as an electronic paymentA transfer of funds which discharges an obligation on the part of a payer vis-à-vis a payee. funds institution (IFPE) in April 2021. In late August, Mexico’s CNBV granted Sonect the IFPE license. Sonect joins 37 companies authorized to provide fintech services in Mexico.

Cash is King in Mexico

Cash dominates retail payments in Mexico. CurrencyThe money used in a particular country at a particular time, like dollar, yen, euro, etc., consisting of banknotes and coins, that does not require endorsement as a medium of exchange. in circulation grew during the Covid-19 pandemic. Mexicans have not embraced Cobro Digital (Digital Charging or CoDi), Banco de México’s payment solution.

Mexico needs access to ATMs and many terminals are not even near to users. – Efraín Navarrete, Sonect’s former operations and finance manager in Mexico.

While cash prevails in payments, many pain points exist in Mexicans’ access to cash. Mexico had 59,415 ATMs in 2020, per the National Banking and Securities Commission’s (CNBV) latest Financial Inclusion Report (CNBV 2021a: 12, 31-35). While 95% of Mexicans have access to ATMs, their geographic coverage is uneven, as just 59% of municipalities have a terminal (see Map 1). Most ATMs are in Mexico City, Monterrey, Guadalajara, Puebla, and Toluca. 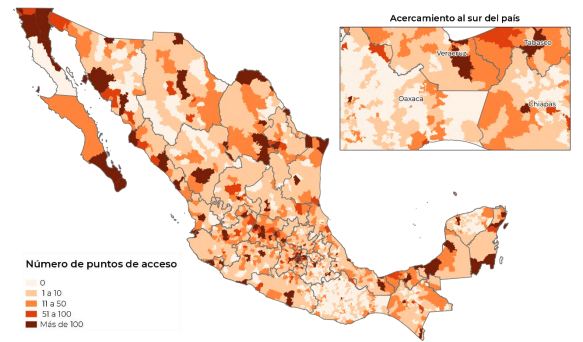 Many Mexicans worry about crime and violence when using cash access points. Most Mexicans in urban areas report feeling unsafe when using ATMs (76.5%) and going to bank branches (62.6%), according to the June 2022 survey from the National Institute of Statistics, Geography, and Computing (INEGI).

Sonect founder Sandipan Chakraborty presented at the Future of Cash Conference, held in Madrid on September 14-16, 2022.