Categories : Cash and Crises, Cash facilitates budgetary control, Cash is a contingency and fall-back solution, Cash is a public good
Tags : Banknotes, Cash demand, Cash Infrastructure, Inflation
After record growth in 2020, global demand for banknotes has returned to a normal situation. More recently, rising inflation and increasing interest rates have been negatively impacting cash balances. More concerning is the decreasing transactional use of cash, which puts pressure on the cash infrastructure. The cash community should make the case that cash is part of a critical public infrastructure, the maintenance and development of which should be financed accordingly.
Antti Heinonen
view more articles

The last few years have been dramatic for the global economy and society. The exceptional incidents have been mirrored in the use of and demand for cashMoney in physical form such as banknotes and coins.. Despite the decline in cash usage at the point of sale due to lockdowns and the surge in online shopping, banknoteA banknote (or ‘bill’ as it is often referred to in the US) is a type of negotiable promissory note, issued by a bank or other licensed authority, payable to the bearer on demand. circulation, in value terms, paradoxically reached record growth rates in 2020. When the pandemic gradually eased its grip towards the end of 2021, a return to a new normal was visible in cash demand, as demonstrated in the first part of the current study. However, the events since then have shown this to be only temporary because the restrictions during the pandemic disrupted global supply chains, and the Russian invasion of Ukraine created further uncertainty. The impacts have been felt worldwide in rapidly increasing food and energy prices and shortages of vital commodities.

The first part of the current study, published in June, was limited to note circulation in value terms. Now that information is available on the denominational demand; further light can be shed on the development of the store of valueOne of the functions of money or more generally of any asset that can be saved and exchanged at a later time without loss of its purchasing power. See also Precautionary Holdings. function of cash in 2021. The denominational demand is analysed using various indicators. Furthermore,  we will assess the impacts on cash demand caused by the growing inflation and the geopolitical tensions created by the Russian attack by considering the annual growth rates of banknote demand during the first part of 2022. The article will conclude with potential implications of the current developments for the future.

In the case of cash demand and circulation, the volume indicator is more interesting than the value because volumes tell the story regarding production, processing, or transportation. This is appropriate, particularly when demand for cash for transactions (small and medium denominations) and savings and precautionary purposes (high denominations) evolve differently. So, we should focus mainly on volume development in the optimal world.

In the real world, however, value data is more widely available. Central bank economists are mainly focused on the value of banknotes in circulation. It is an integral part of the monetary aggregates, the fluctuations of which impact the implementation of the monetary policy. Therefore, it is generally easy to follow cash circulation in value terms because most central banks publish monthly, at the very least, the variable “currencyThe money used in a particular country at a particular time, like dollar, yen, euro, etc., consisting of banknotes and coins, that does not require endorsement as a medium of exchange. outside banks”. Regarding the volumes, i.e. the denominational circulation of banknotes, some central banks publish the figures at the monthly level, but the majority only once a year in their annual report or similar. Therefore, the available data in volume terms is not as comprehensive as in value terms. Furthermore, if at all, it becomes available with a longer delay than the value data.

With the generous support of several central bank colleagues, the publicly available data has been complemented for several different currencies. Accordingly, the annual growth rates of the number of banknotes in circulation were available for 99 currencies (in comparison to 140 currencies in value terms). Figure 1 addresses the distributions of these 99 currencies in 2020 and 2021. 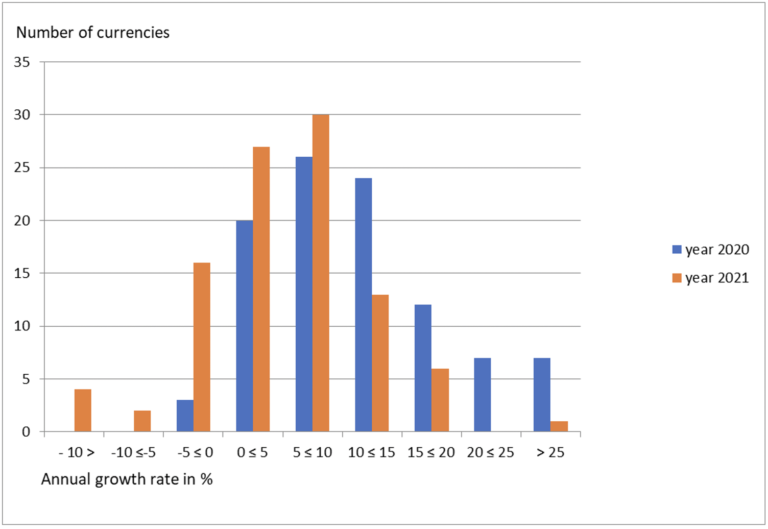 Figure 1. Annual Growth Rate by the Number of Banknotes in Circulation of 99 Currencies, 2020-2021

A few observations can be made based on Figure 1. First, it shows that the development in 2021 was very heterogeneous globally. The year 2020 was, in that sense, very exceptional because only three currencies experienced negative growth in volume terms. Even if the shapes of the distributions in 2020 and 2021 have some similarities, the growth rates were, on average, significantly higher in 2020 than in 2021. The distribution in 2021 has shifted to the left, with 22 % of the currencies in the sample having a negative growth rate. This development is also illustrated by the median annual volume growth of 5.0 % in 2021, half of the 2020  value of 10.0 %.

It is also interesting to compare the growth rates in both value and volume terms in 2021, limiting the study to those 100 currencies for which both figures are available. The respective distributions are depicted in Figure 2. 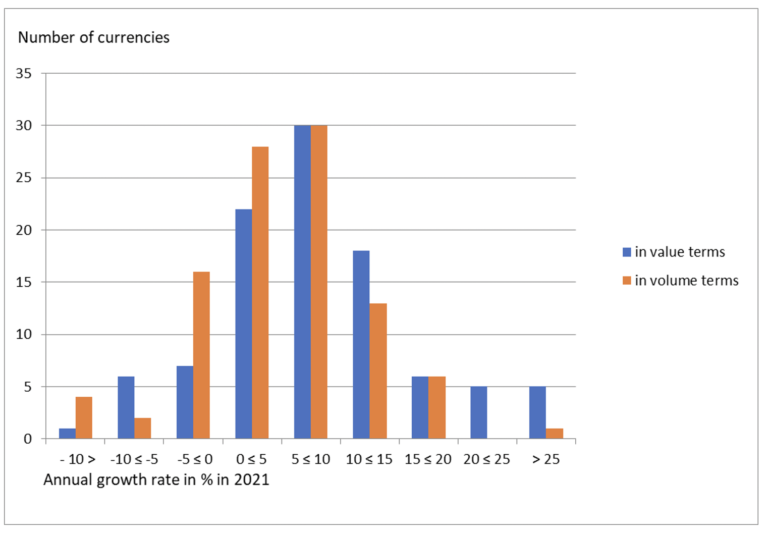 Figure 2. Annual Growth Rate by the Value and Number of Banknotes in Circulation of 100 Currencies, 2021

Figure 2 shows that the value and volume growth distributions are pretty similar. Whereas in 2020, the median growth rate in value terms (16.6 %) was much higher than in volume terms (10.0 %), this difference was much lower in 2021 (7.2 % vs 5.0 %). Therefore, in 2021, the demand has generally concerned the various denominations more evenly, not, in particular, the high denominationEach individual value in a series of banknotes or coins. banknotes as in 2020.

This development can also be demonstrated with another indicator. In Figure 3, we divide the currencies under consideration into three groups: 1) the annual volume and value growth rates are within a narrow range (15 per centFraction of a currency representing the hundredth of the unit of account.) (called the “same”), 2) the annual banknote volume growth is at least 15 % lower than the value growth and 3) the volume growth is at least 15 % higher than the value growth. When comparing the years 2020 and 2021 in this respect, it is evident that the volume and value growth developed more hand in hand in 2021 than in 2020. This means that the public has at least partly given up on the high denominations accumulated in 2020 in high inflation and higher interest rates. 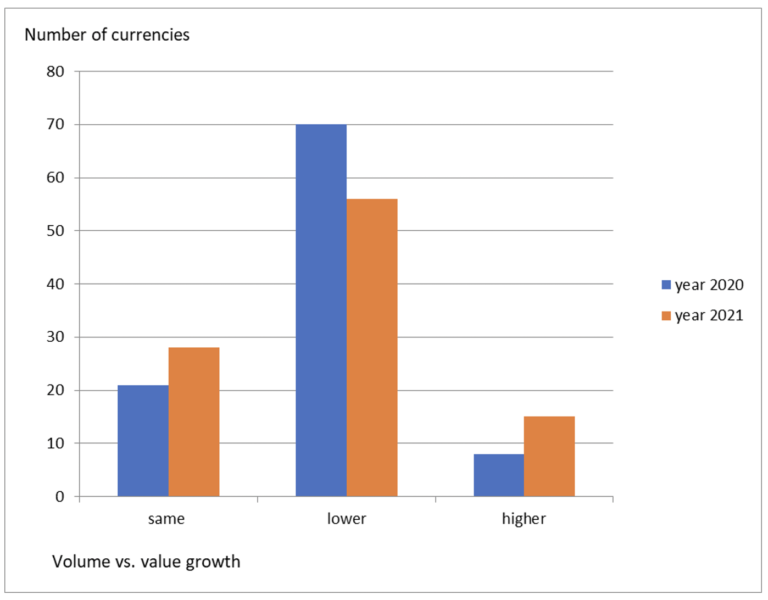 Even if the number of daily new Covid-19 cases is at the same level as one year ago, their seriousness has decreased, and the growing inflation has become a significant concern. Inflation rates in many advanced economies have been the highest since the 1980s.

High inflation has mainly negative impacts on banknote demand. First, in the environment of growing interest rates, it increases the opportunity cost of holding savings in cash and whittle away significantly the purchasing power of savings. Second, a higher inflation rate than wages and salaries decreases the real income of citizens and may urge them to use part of their cash savings for consumption. Third, some central banks (ECB and central banks of Denmark, Japan, Sweden and Switzerland) have used negative interest rates during the last few years. In such circumstances, it has been more profitable for banks to keep cash in their vaults rather than deposit it at the central bank. Now when central banks have started to increase their deposit rates because of inflation, it will be no more profitable to hold significant amounts of vaultSafe; strong room. A place reinforced with special security measures where high-value objects and documents are safeguarded. In central banks, banknotes and other objects are safeguarded in vaults. cash, and it is instead deposited at the central bank. Finally, even if high inflation rates may increase the banknote demand in value terms, this will not be mirrored in the volumes and will often lead to the issuance of new higher denominations. 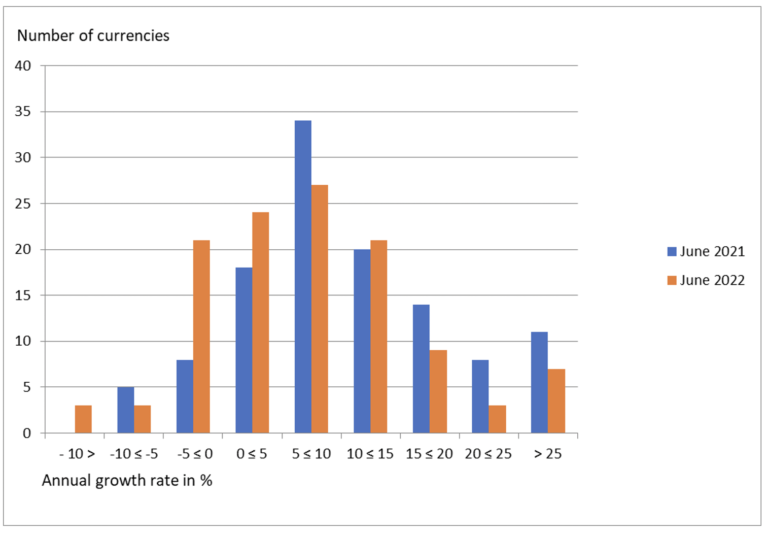 Figure 4. Annual Growth Rate by the Value of Banknotes in Circulation of 118 Currencies, End of June 2021 and June 2022

The interpretation of Figure 4 is complicated because, besides the impacts of inflation, the increasing uncertainty created by the Russian attack on Ukraine affects public behaviour. Their effects on the cash demand are opposite to each other. For example, the annual growth rates of the value of both Swedish krona and Norwegian krone banknotes in circulation increased in June 2022, which hasn’t been shared during the last decade. This might be explained by the uncertainty created by the war initiated by a country in a close neighbourhood. A consequence of these various forces having a bearing on consumer behaviour is the very diverse annual growth rates in June 2022. As in Figure 1, this heterogeneity of the development is striking.

Another difference compared to the situation during the last few years is the high percentage of currencies having a negative annual growth rate of the value of banknotes in circulation, exceeding 22 % in June 2022.

The 2021 statistics regarding both values and volumes of banknote circulation indicate that the situation developed towards normality after the record growth rates in 2020. However, the recent development highlights the negative impacts of inflation and increasing interest rates on cash balances. Even if this situation continues, the high inflation rates would be, in all likelihood, only a mid-term issue, given the heightened emphasis on price stability in the goal-setting of central banks. More concerning is the current decreasing trend of the transactional use of cash, which puts pressure on the maintenance of the cash infrastructure.

There are no indications that the uncertainty experienced during the last couple of years will diminish in the forthcoming years; the probability of the opposite is much higher. Extreme weather phenomena, floods, storms, droughts and prolonged heatwaves will increase uncertainty and cause poverty, migration and humanitarian crises. A well-functioning cash infrastructure is a must in many years to come to secure the daily living of those affected but also to everybody, which is shown by the record growth rates in demand for banknotes globally during the Covid-19 pandemic in 2020. Central banks and other stakeholders in the cash cycleRepresents the various stages of the lifecycle of cash, from issuance by the central bank, circulation in the economy, to destruction by the central bank. should find innovative solutions to ensure that. Furthermore, the cash community should make the case that because of its unique properties, cash is part of the public infrastructure, the maintenance and development of which should be financed accordingly.