Will robots use cashMoney in physical form such as banknotes and coins.? At first glance, this question seems too silly to warrant a response. Of course, they won’t. First, if robots have evolved to become consumers, then none of us will be working, and none of us will need any form of moneyFrom the Latin word moneta, nickname that was given by Romans to the goddess Juno because there was a minting workshop next to her temple. Money is any item that is generally accepted as payment for goods and services and repayment of debts, such as taxes, in a particular region, country or socio-economic context. Its onset dates back to the origins of humanity and its physical representation has taken on very varied forms until the appearance of metal coins. The banknote, a typical representati..., let alone cash. And second, if they did need some way to exchangeThe Eurosystem comprises the European Central Bank and the national central banks of those countries that have adopted the euro. value, it would come in an entirely digital form.

That said, perhaps the question posed in a recent post to the ATM Appreciation Society’s website is not as idiotic as it first appears. After all, I had asked myself something similar a few months earlier. However, I had posed the problem somewhat differently: It followed on from experience in a Las Vegas bar and involved having to make an ethical choice over whether and how to ‘tip’ the robot bar-tender who had just fixed me a perfect Margarita in a 20-second blur of whirring glass and steel without spilling a drop. 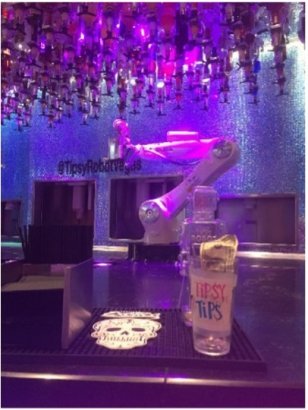 As existential problems go, these questions must rank alongside Philip K. Dick’s original Blade Runner question: Do androids dream of electric sheep? But here’s the thing: The robot mixologist asking for a tip was accurate. It wasn’t a techno-utopian idea from a science-fiction movie. Having dispensed my cocktail, the machine slid the tip jar toward me (see photo). Then it hovered expectantly before gliding off to repeat the process for another customer further along the bar. Although not entirely of the standard of the robot bar-tender in Passengers, a robot – or, instead, its human ‘stochastic parrot’ [1] programmer – had nevertheless very cleverly and very amusingly confronted me with a thoroughly futuristic dilemma.

In their different ways, these problems were all pointing to the same: In a rapidly changing world, where artificial intelligence (AI), machine learning, and automation are accelerating beyond our ability to control the outcome, does physical currencyThe money used in a particular country at a particular time, like dollar, yen, euro, etc., consisting of banknotes and coins, that does not require endorsement as a medium of exchange. remain relevant? Apart from anything else, if robots do all the work without needing to be paid, including producing and distributing the Tequila, what use will any of us have for money, let alone cash?

These existential questions were discussed at the CashEssentials’ Future of Cash conference in Madrid in September 2022. Part of the conference involved a Futures Literacy Lab. Facilitated by the UNESCO Chair for the Future of Finance, I and my fellow delegates were asked to consider how futures literacy might improve our perception of possible, plausible, and desirable futures for cash in an increasingly digital and automated world.

In being asked to imagine how life would be lived thirty years hence, the facilitators asked us to think beyond our current reality, not to get stuck thinking about how to tip a robot mixologist or whether ATMs would use voice recognition to authenticate an android customer. Still, about who would own them, and to whom would the benefits of their labour accrue? At least from my perspective, the context was always about whether cash would still be relevant in a Blade Runner society where androids with four-year life spans were more likely than not to dream of electric sheep.

As ever, as an international disasterist, the answer to the cash question depends on where you live and what choice you can exercise over how you pay for things. If you don’t have reliable access to electricity, paying with cash is not a luxury but a necessity. Just ask anyone in Eastern Ukraine right now.

We shouldn’t get ahead of ourselves, though. It’s worth recalling that the ATM was not just arguably the original fintech but was the first machine – the first ‘robo-bank’ if you like [2] – to introduce automation to an unsuspecting public for the first time back in 1967. We take cash machines for granted now. They’re still here, and the chances are they always will be. But it doesn’t mean we shouldn’t be exploring alternatives. And science-fiction is as good a place to start as any.

As Guillaume Lepecq, founder of CashEssentials, pointed out in his preamble to the Futures Literacy lab, “Science-fiction offers an example of why it is both difficult and important to imagine different futures. The 1887 novel by Edward Bellamy Looking Backwardpredicted the adoption of credit cards in 2000. In Star Wars, the Galactic Credit Standard is backed by a rare metal. And in the 2011 dystopian film In Time, fiat currencyA currency established as money, often by government regulation, without an intrinsic value, unlike a precious metal or a merchandise. It was a development step from the use of a commodity money has been replaced by time as each person has a clock on their arm which measures the amount of time they have left to live.”

As Artificial Intelligence becomes ever-less artificial and ever-more intelligent, robots will eventually learn to become sentient. They will not only be able to maintain each other and build new versions of themselves – a process otherwise known as evolution – but also learn to love themselves as Ava did in the film Ex-Machina. Meanwhile, we have to contend with the notion this works both ways: We humans might end up having feelings – or at least having empathy for – robots. When watching the film Silent Running in my teens, I remembered feeling more emotion for the waddling droids Huey, Dewey, and Louis than I did for their unreliable human masters. When watching the original Star Wars a few years later, I’m sure I was not alone in feeling some affection toward C3.PO and R2-D2. In Her, Theodore falls in love with Samantha’s sultry voice, a programme, not even a pieceIn plural, it is commonly used as synonym for units of banknotes and coins. of hardware. And then, at the other end of the scale, my brush with the ‘hovering robo-bartender’ in Las Vegas produced a different set of emotions. Was it hovering with intent? Was it threatening me, scaring me into paying a tip? What hope for cash now if it was?!

For a robot, a banknoteA banknote (or ‘bill’ as it is often referred to in the US) is a type of negotiable promissory note, issued by a bank or other licensed authority, payable to the bearer on demand. is just a piece of paperSee Banknote paper., the number printed on it meaningless, ascribing no value whatsoever. For humans, there is no nutritional value in eating banknotes. And robots don’t need to eat anything because their energy source, the only consumable of any fundamental importance to them, comes through a plug in the form of electricity. Kilowatt hours are their currency, just as salt used to be the currency in which taxes were paid to the British in India a century ago.

As in the early days of mobile money, where airtime credits became a tradeable currency, energy became the only valid currency for a robot. As anyone with a robot floor-duster or lawn-mower will recognise, if robots don’t crawl home to recharge themselves, they stop working. Not dead as such, just dormant. Without electricity, they can’t work.

This leaves one thorny issue: It’s not so much about who owns the robot, but who owns the electricity? Which, in turn, begs the question: How does electricity become legal tenderMoney that is legally valid for the payment of debts and must be accepted for that purpose when offered. Each jurisdiction determines what is legal tender, but essentially it is anything which when offered (“tendered”) in payment of a debt extinguishes the debt. There is no obligation on the creditor to accept the tendered payment, but the act of tendering the payment in legal tender discharges the debt. when, like salt from the sea, it can be manufactured more or less for free from hydro, wind, and solar sources by any individual with a generator or solar panel and when, like money printed during quantitative easing, its supply is limitless?

More than any other film, it is perhaps Blade Runner that has the most to say about our future and, therefore, the most to say about these problems and the future of money. Most humans, including Deckard (Harrison Ford), refuse to identify with androids, negating the quality of empathy that distinguishes humans from robots. Counterintuitively, the replicant Roy Batty (Rutger Hauer) emerges as the emotional fulcrum of Blade Runner. While reflecting on the bittersweet nature of mortality in those final rain-soaked moments before switching off its electricity supply, it could have been talking just as much about cash as about the future of the human race when uttering those immortal words “All those moments will be lost in time. Like tears in rain.”

[2]  When the world’s first automated cash dispenserElectronic device that, primarily dispenses cash after identification of the user, using a payment card or another device such as a mobile phone or biometric identification. See ATM. was unveiled in 1967, the press called it ‘the robo-bank.’’