A Global Update on Cash Demand in Turbulent Times: Part I

Chair of the BanknoteA banknote (or ‘bill’ as it is often referred to in the US) is a type of negotiable promissory note, issued by a bank or other licensed authority, payable to the bearer on demand. More Ethics Initiative; Member of the CashEssentials Steering Committee ; Former Director, Banknotes of the European Central Bank

This article was first published in CurrencyThe money used in a particular country at a particular time, like dollar, yen, euro, etc., consisting of banknotes and coins, that does not require endorsement as a medium of exchange. More News in June 2022. It is republished here with the permission of the author.

Currency News has published annual updates on banknoteA banknote (or ‘bill’ as it is often referred to in the US) is a type of negotiable promissory note, issued by a bank or other licensed authority, payable to the bearer on demand. More developments at the global level since September 2017. Because of the exceptional situation created by the Covid-19 pandemic, being simultaneously mirrored in the decreasing transactional and increasing precautionary demand for cashMoney in physical form such as banknotes and coins. More, the update was published last year in two parts. The first part focused on the development of banknote circulation in value terms in 2020, comparing it with the past and the second part, when more information was available also on the denominational demand, shed further light on the store of valueOne of the functions of money or more generally of any asset that can be saved and exchanged at a later time without loss of its purchasing power. See also Precautionary Holdings. More function of cash during the pandemic.

The hope that this year’s update would illustrate some kind of return to a new normal in cash demand has shown to be unrealistic. Not only have the lockdowns during the pandemic disrupted global supply chains, but the shocking Russian invasion of Ukraine has recently created further uncertainty. Even if the war has hit hardest the Ukrainian people and infrastructure, its impacts have been felt across the world, besides creating a strong reaction, it has brought about galloping inflation of food and energy prices.

All this means that in order for this annual update to illuminate also the more recent events, it will be again this year divided into two parts. The current first part will consider the development of banknote circulation in value terms in 2021 and address in particular, what did happen to the higher-than-normal cash balances accumulated during 2020. In addition, the effects of the cash paradox referred above, will be shortly considered. The second part will be published in September when more extensive information is available also in volume terms, and the impacts on cash demand caused by the growing inflation and the geopolitical tensions created by the Russian attack can be assessed. The second part will further elaborate on the potential consequences of recent developments for the future of cash.

When addressing banknote demand globally, the most widely publicly available information is the value of banknotes in circulation. Besides “banknotes in circulation”, the only available figure in some cases is “cash in circulationThe value (or number of units) of the banknotes and coins in circulation within an economy. Cash in circulation is included in the M1 monetary aggregate and comprises only the banknotes and coins in circulation outside the Monetary Financial Institutions (MFI), as stated in the consolidated balance sheet of the MFIs, which means that the cash issued and held by the MFIs has been subtracted (“cash reserves”). Cash in circulation does not include the balance of the central bank’s own banknot... More”, i.e. the figure includes also coins, which are generally just a few percentages of the total cash in circulation, or “currency outside banks”. The latter figure excludes the banks´ vaultSafe; strong room. A place reinforced with special security measures where high-value objects and documents are safeguarded. In central banks, banknotes and other objects are safeguarded in vaults. More cash. After central banks have introduced negative interest rates, the banks´ vault cash has increased exponentially in the case of some currencies. So not including it would give a wrong impression of the changes in the demand for banknotes, particularly when the growing inflation has recently begun to have an impact on the level of interest rates. However, only very few central banks have introduced negative interest rates, and these central banks typically publish the banknotes in circulation figures. Therefore, using slightly differing concepts will have only a minor, if any, impact on the results of this study.

Let us look first at the annual growth rates by the value of banknotes in circulation in 2021, as described in Graph 1.

Graph 1. Annual growth rate by value of banknotes in circulation of 140 currencies in 2021. 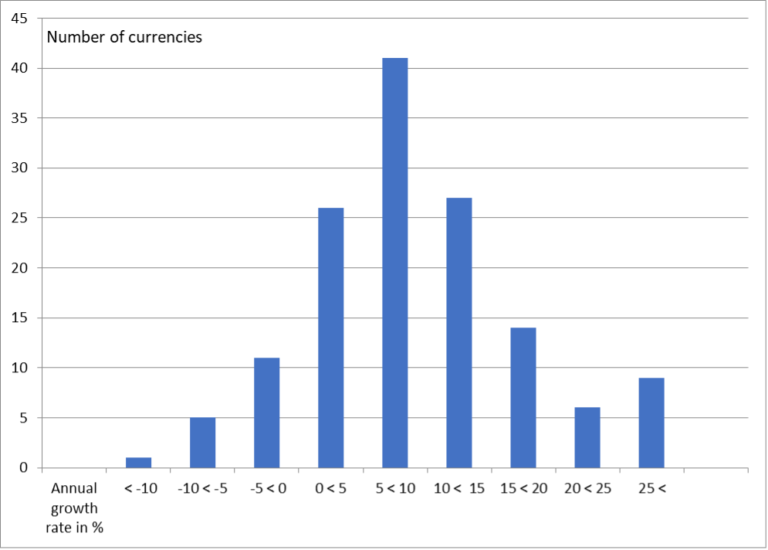 The general impression conveyed by Graph 1 is confirmed by Graph 2, in which the growth rate in 2021 is compared with those in 2020 and 2019, the latter being the last “normal” year before the pandemic. 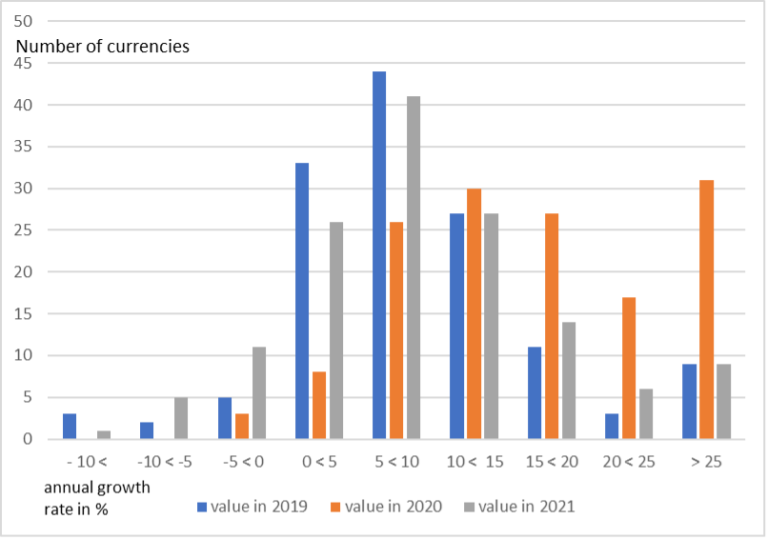 The distributions in 2019 and 2021 are surprisingly similar; that of 2020 instead is squeezed to the right towards the higher growth rates. The exceptionality of 2020 can be further highlighted by considering the median annual growth rates by the value of banknotes in circulation during the last ten years. They are depicted in Graph 3. 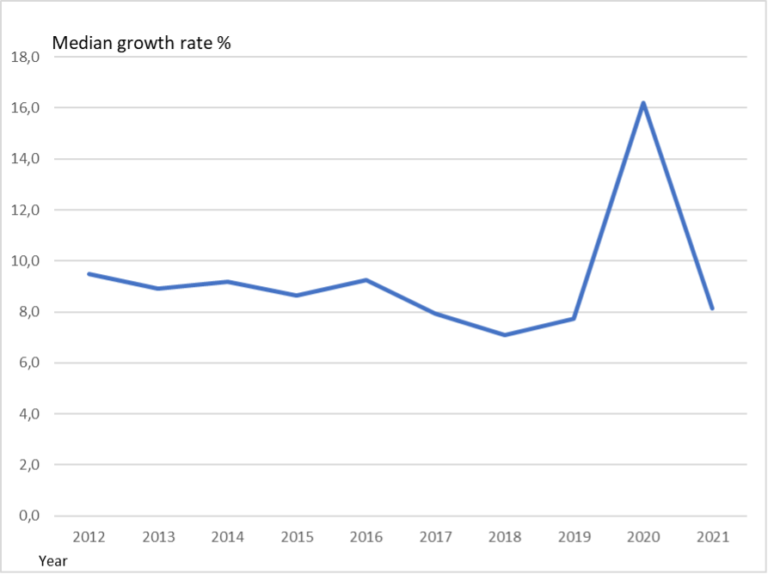 Even if the 2021 figures depicted above refer to a return to normality, the situation has been upset by the recent events. Therefore, it is too early to anticipate what will happen to the banknote demand in 2022 or in the medium term. On the one hand, the rapidly climbing interest rates will increase the opportunity cost of holding savings in cash. On the other hand, the uncertainty created by the geopolitical tensions will increase the precautionary motive to keep cash balances.

Seemingly independently from the growing precautionary demand for banknotes the long-term trend of the share of cash in transactions is generally decreasing. This divergence in the development of using cash for payments and saving purposes, respectively might not be an issue, if cash would still be the dominant means of paymentA transfer of funds which discharges an obligation on the part of a payer vis-à-vis a payee. More in a certain country or region. However, in a situation where cash is on the way to becoming a marginal payment instrumentDevice, tool, procedure or system used to make a transaction or settle a debt. More, this development raises the question, what does it mean for the maintenance of the cash infrastructure and the role of public moneyFrom the Latin word moneta, nickname that was given by Romans to the goddess Juno because there was a minting workshop next to her temple. Money is any item that is generally accepted as payment for goods and services and repayment of debts, such as taxes, in a particular region, country or socio-economic context. Its onset dates back to the origins of humanity and its physical representation has taken on very varied forms until the appearance of metal coins. The banknote, a typical representati... More? To several central banks facing this question the answer seems to be the central bank digital currency (CBDC)A digital payment instrument, denominated in the national unit of account, and a direct liability of the central bank, like banknotes. A general purpose CBDC can be used by the public for day-to-day payments like cash. More.

According to the most recent BIS survey, nine out of 10 central banks in the survey are exploring CBDCs, and more than half are now developing them or running concrete experiments. Furthermore, more than two-thirds of central banks consider that they will likely or possibly issue a retail CBDC in the short or medium term.

Evidently, there are other reasons for central banks to develop CBDCs than just the diminishing role of cash in payments. The development work may be related to the improvement of the existing payment infrastructure, or the technological development of a CBDC is found useful per se in this world of growing threats of cyberattacks.

Even if the technological issues related to CBDCs seem to be solvable, the most important questions in their successful launch relate to two behavioural questions. Why would citizens start to use digital currencies issued by a central bank if they are satisfied with their current digital payment media issued by the private sector? What is the business case for the banking sector in case a central bank would like to delegate the intermediation of a CBDC to banks? Considering the uncertainty surrounding these behavioural questions, the central banks would benefit from a Plan B in their forward-looking development work.

The trust in physical cash has been evidenced during the Covid-19 pandemic and in the earlier crises.[1] Cash is under one’s control and not dependent upon the working of other systems. It is something tangible, which is a critical characteristic under uncertainty. The strong public opposition against the CBDC raised in some central bank surveys can indeed result from the perception and worry of the citizens that it will displace cash.[2] There is no other public good currently or in the foreseeable future that has or will provide similar properties, which highlights the role of cash as public infrastructure. Therefore, a well-functioning cash infrastructure is Plan B for those central banks that are developing CBDCs because of the diminishing role of physical cash in payments. That does not mean only the maintenance of the current infrastructure but also the development of innovative solutions needed in the changing environment. This kind of Plan B is a prerequisite for the availability and usability of cash in a crisis. The central banks have, in this respect, excellent reasons to advocate the continued general acceptance of cash.