Categories : Cash is also a store of value, Cash is available to all users, Cash is the first step of financial inclusion, Cash is the most widely used payment instrument
Tags : Consumer Payment Choice, Covid-19, Federal Reserve, US
Cash payments in the United States grew in 2021, following a sharp decline in 2020, according to the Federal Reserve’s 2022 Diary of Consumer Payment Choice.
Guillaume Lepecq
view more articles

Cash Payments Bounced Back in 2021

The 2021 Diary of Consumer Payment Choice, carried out in October 2020, showed that consumers’ paymentA transfer of funds which discharges an obligation on the part of a payer vis-à-vis a payee. behaviour in the United States changed dramatically during the Covid-19 pandemic. Total payments, cashMoney in physical form such as banknotes and coins., and non-cash declined by 20%, primarily due to the drop in low-value transactions (under $25). The former disproportionately affected cash, which historically accounted for most small payments.

The 2022 Diary of Consumer Payment Choice indicates that cash payments have bounced back slightly from 19% of all transactions in 2020 to 20% in 2021. This is notable as it is the first increase since the Diary was launched in 2016 and suggests that cash payments hit a low point in the first year of the pandemic. The findings also contradict statements from Visa and Mastercard that the shift toward digital payments during the pandemic is permanent.

Graph 1. United States: Share of Payments Use for All Payments (by number), 2022. 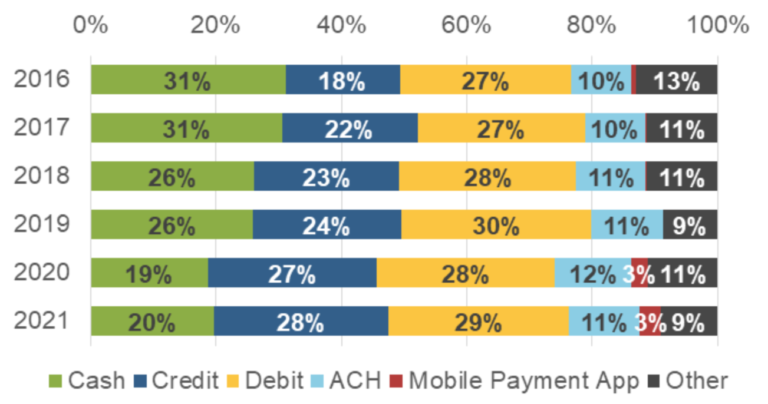 The decline in payments under $25 is the main reason both total and cash payments have declined since 2019. Changes to everyday habits (like stopping for a cup of coffee on the way to work or eating out) are likely a significant contributor to this decline. However, small-value cash payments are unlikely to increase to pre-pandemic levels because such transactions have decreased annually since 2016.

The Cash Paradox Is Still Strong

Between October 2016 and October 2019, currencyThe money used in a particular country at a particular time, like dollar, yen, euro, etc., consisting of banknotes and coins, that does not require endorsement as a medium of exchange. in circulation increased by approximately $300 billion, an average of 7% per centFraction of a currency representing the hundredth of the unit of account. annually. During the Covid-19 pandemic, from October 2019 to October 2021, cash in circulationThe value (or number of units) of the banknotes and coins in circulation within an economy. Cash in circulation is included in the M1 monetary aggregate and comprises only the banknotes and coins in circulation outside the Monetary Financial Institutions (MFI), as stated in the consolidated balance sheet of the MFIs, which means that the cash issued and held by the MFIs has been subtracted (“cash reserves”). Cash in circulation does not include the balance of the central bank’s own banknot... increased by more than $423 billion, or 12% annually. The trend is not limited to the U.S. and has been described as the cash paradox: cash is used less for day-to-day transactions, but its demand as a store of valueOne of the functions of money or more generally of any asset that can be saved and exchanged at a later time without loss of its purchasing power. See also Precautionary Holdings. keeps growing.

Consumers’ average cash holdings as store-of-value have increased more rapidly since 2018, with increases of 22% in 2019, 24% in 2020, and 20% in 2021. The average value of cash held as a store-of-value continued to increase, reaching $347 per person in October 2021, a 16% year-on-year increase. The significant increase since 2019 shows that aggregate demand for U.S. currency increased during times of uncertainty.

Cash Is Essential for Low-Income Households

The report stresses that transactional cash use decreased for all income groups across the pandemic, except for households with incomes below $25,000.

Back to a New Normal?

The report does not make any predictions about cash demand. However, three factors are likely to influence future cash demand.